FEATURE: How We’ll Be Able to Hear Live Music This Summer. 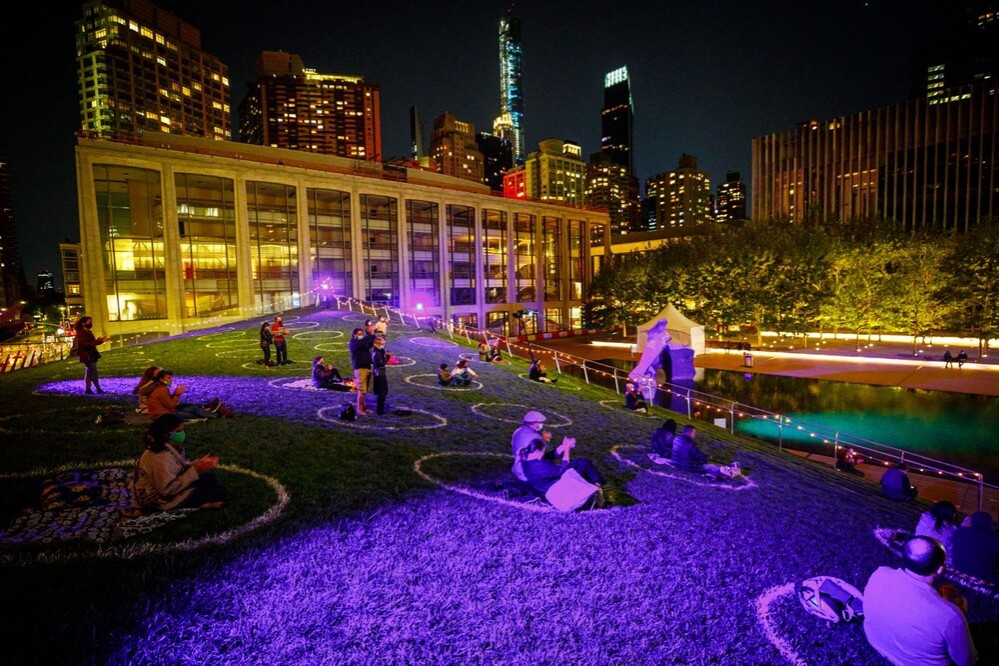 Last summer, after the first COVID wave had broken, a few peeps and pops of live music materialized here and there, like memories of another world. A jazz trio, a brace of cellists, a platoon of orchestra members playing from the back of a pickup truck, an old-timey swing band that got passersby to dance—these felt like good omens for New York’s artistic resurrection. But they were only a tease. The nation’s performing-arts ecosystem shut down a year ago and will likely stay dormant for another six months or so, until filing into a theater or concert hall no longer feels like a potentially lethal activity. This time, though, when warm weather finally arrives, artists and presenters will be ready. Lincoln Center’s two opera houses, three theaters, and clutch of concert halls lie dark, but parts of the campus that are open to the sky will come alive with ten new venues, ranging from proper stages and widely spaced chairs to movable corrals. Other performance spaces will sprout across New York, reshaping the city’s geography of culture.

As with vaccinations, taxes, and transportation, the city and state have separate and competing bureaucracies of outdoor culture. The state’s NY PopsUp program promises hundreds of free, unticketed, and unannounced concerts and theatrical events scattered around the state and in all five boroughs, curated by the director and choreographer Zack Winokur. There won’t be answers to the usual what-where-when questions for these events: You’ll just know a show when you come across it. The city won’t produce any events itself, but it is rolling out an Open Culture framework that allows cultural institutions to take over specific streets for one-off performances and even to sell tickets.

With that encouragement and support, the city’s arts groups can mobilize. They’ve already started. As part of their efforts to revive the city neighborhood by neighborhood, two civic architecture organizations, the Van Alen Institute and the Urban Design Forum, have paired designers with small arts groups to create temporary outdoor venues and figure out how to attract audiences big enough to provide a communal experience and small enough to be safe. (The standard seems to be about 100 people at a time.) The architecture firm Marvel has designed a quick-deployment street theater made of shipping containers that could be elevated to let traffic pass underneath. The Open Culture requirements might be troublesome, though: Presenters can erect a stage or use amplified sound, but not both. They also have to leave a 15-foot emergency lane open and set up, rehearse, perform, and strike the set, all within a 12-hour window.

We badly need these pinpricks of joy. The recent history of outdoor restaurants, open streets, and vaccination sites suggests we should expect some early chaos. But from early April into fall, there is time to iron out the rules, compensate for disappointments, and perfect New York’s new identity as home to a mammoth festival of tiny events. This is, after all, a city that runs on art. All the predictions about how businesses react and whether New Yorkers leave, return, feel safe, shop, commute, or despair all depend on a collective sense of optimism. After a year of being fused with our screens, we need the blare of a live band, the sight of dancers intertwined, an unamplified voice competing with the din of a resurgent city. They are ingredients so essential that we hardly even realized how bruising their absence has been. In a city where putting on a show has generally been a risky, regimented, and hugely expensive affair, there’s something magical about the idea of guerilla performances appearing here and there in every borough, infrequently enough to make them special, often enough to become a new feature of urban life. In this new version of cultural life, attending a concert is more like glimpsing a rare bird than organizing a night out.

It’s not as if we’re starting from zero. The New York Philharmonic has been performing in the parks for nearly six decades. The organization Make Music New York sows more than 1,000 concerts all over the city every summer solstice. Bryant Park has been hosting outdoor events for years, and even if offices remain empty for months to come, its programming — more than 100 jazz and classical concerts in the park and in nearby public spaces — may prove to be the summertime equivalent of the Rockefeller Center Christmas Tree: a reason to visit midtown. But this moment nudges large performing arts organizations to extend their reach and capitalize on years of neighborhood concerts. Lincoln Center is forming symbiotic relationships with an assortment of cultural minnows like the Bronx Academy of Arts and Dance, the Harlem Arts Alliance, the Korean Cultural Center, and the Weeksville Heritage Center. Those kinds of exchanges, which should outlast the pandemic, helps distribute live arts around a city that has suddenly, dramatically decentralized. NY PopsUP catches that spirit. “Instead of there being masses of audience members at a handful of events, this Festival is a mass of events, each for a safe and secure ‘handful’ of audience members,” the program’s website reads.

In the short term, a proliferation of outdoor events allows us to tap the deep well of talent that has sat still and silent for a year. While theaters, dance companies, and orchestras puzzle their way toward reopening and struggle to stay solvent, the actors, dancers, and musicians they depend on need to be reminded how badly we miss them and how deeply we want them here. The pandemic has savaged the arts community with a ruthlessness not seen since the early days of the AIDS crisis, not just by killing its members but also by sweeping away careers, opportunities, income, and audiences, as a new report from the state comptroller’s office makes clear with miserable math: Almost overnight, two thirds of the arts sector’s nearly 90,000 jobs vanished. Rebuilding that cultural infrastructure will take time. Many performers dispersed and some must have given up, changed careers, or let their skills decline. Those who have stuck it out, either because they had the resources to survive or because they had no choice, are aching to be seen and heard again. A network of pop-up events and impromptu sidewalk performances won’t rebuild a multibillion-dollar economy overnight or even equip artists with pointe shoes and bow rosin, but it’s a thrilling start.

More than that, it will be a new status quo. The pandemic launched an age of duct-tape urbanism; cities learned to improvise massive reorganizations in traffic, dining, schooling, and shopping. Now, they’re doing the same with cultural life. Some of these transformations will fade, others will endure because New Yorkers discover they like them. And what’s not to like about summer streets resounding with live chamber music and poetry slams?