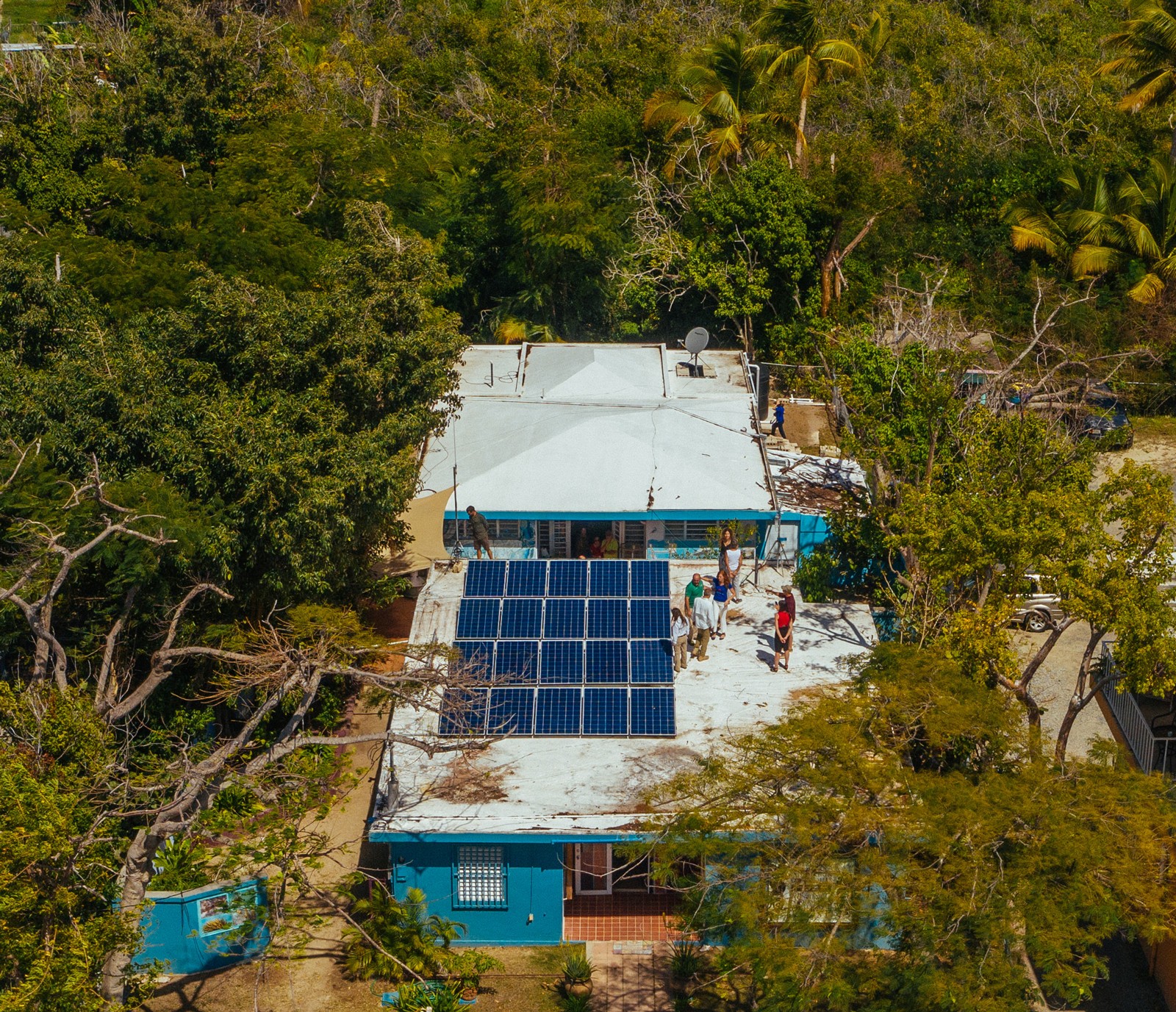 On September 20, 2017, Hurricane María caused incredible destruction on the islands of Puerto Rico, levelling roads, destroying buildings and killing an estimated 3,000 people. Rich and poor, urban and rural, young and old, every resident was affected by the worst natural disaster for the region in recent history, and a major humanitarian crisis. Resilient Power Puerto Rico is an architect-led effort to confront the humanitarian crisis that ensued after hurricanes Irma and Maria caused massive destruction to the islands of Puerto Rico, collapsing the energy grid and damaging 80% of the transmission and distribution lines. 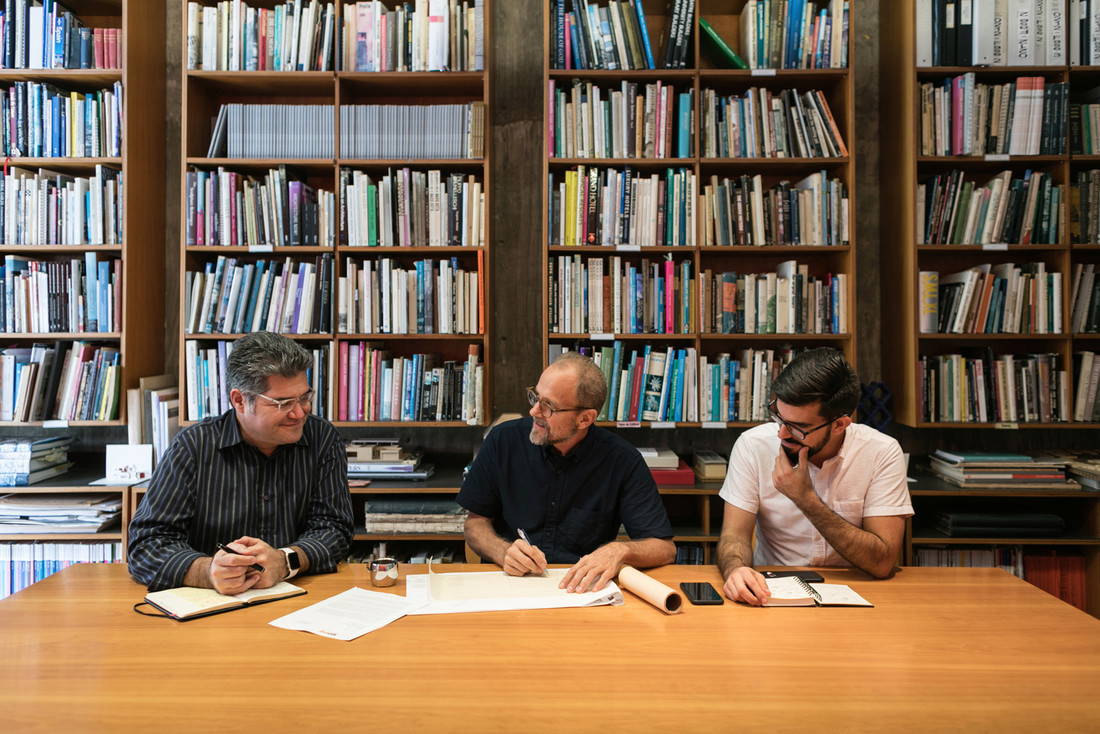 How can architects foster a sustainable and resilient Puerto Rico in the face of climate change?
Hurricane María precipitated a total collapse of the Island’s energy grid, leaving Puerto Rico without power and an estimated 80% of the transmission and distribution lines damaged. Communications systems went silent, gas and water became scarce, and urban life was made very difficult. Before María, 98% of the energy consumed came from oil, the most expensive fossil fuel. Generation of this energy is concentrated in the south, while most of the consumption is in the north. The solar hubs are intended to ignite and maintain dialogue on urban resilience, preparedness, renewable energy, and energy independence. ©Monica Felix 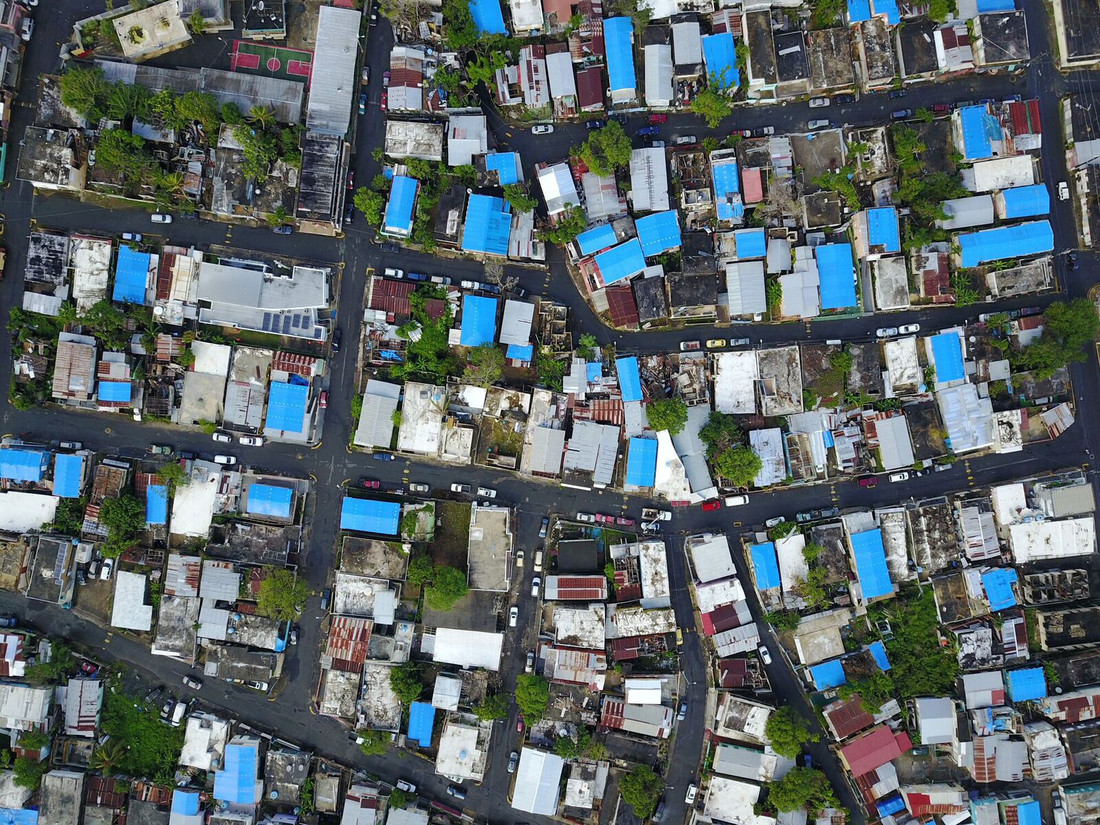 Blue tarps as temporary roofs.
Launched just after the devastating landfall of Hurricane María and organized by a group of the Puerto Rican diaspora in New York City, the project seeks to bring resilience to cities and communities by offering photovoltaic (PV) energy systems and battery storage. © Nova Concept 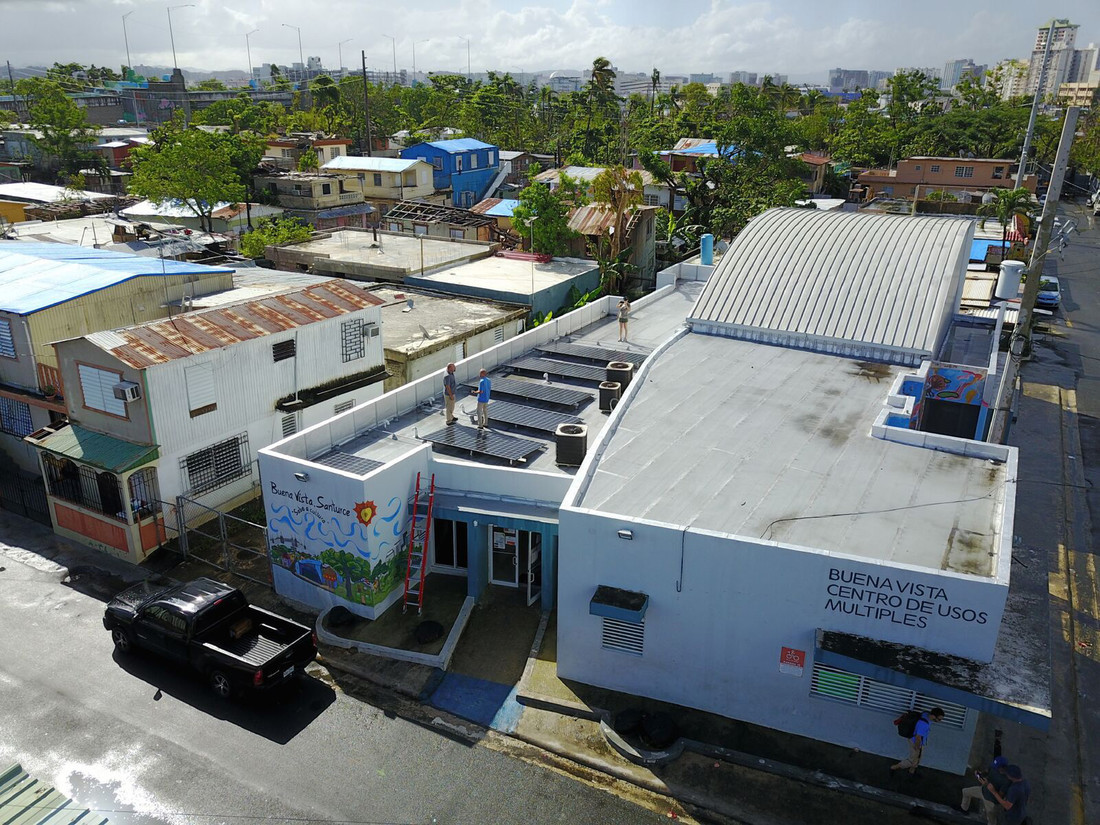 Caño Martin Peña - Buena Vista Community Center.
El Caño Martín Peña is one of the densest sectors in the metropolitan area around San Juan, Puerto Rico. With a population of over 26,000 people, this community desperately needed power to survive. Located in historically filled-in wetlands, this area has been informally “developed” through generations, while being severely underserved by governments. The El Caño area is affected by recurrent floods and poor infrastructure, among many other urban design and social problems. ©Nova Concept 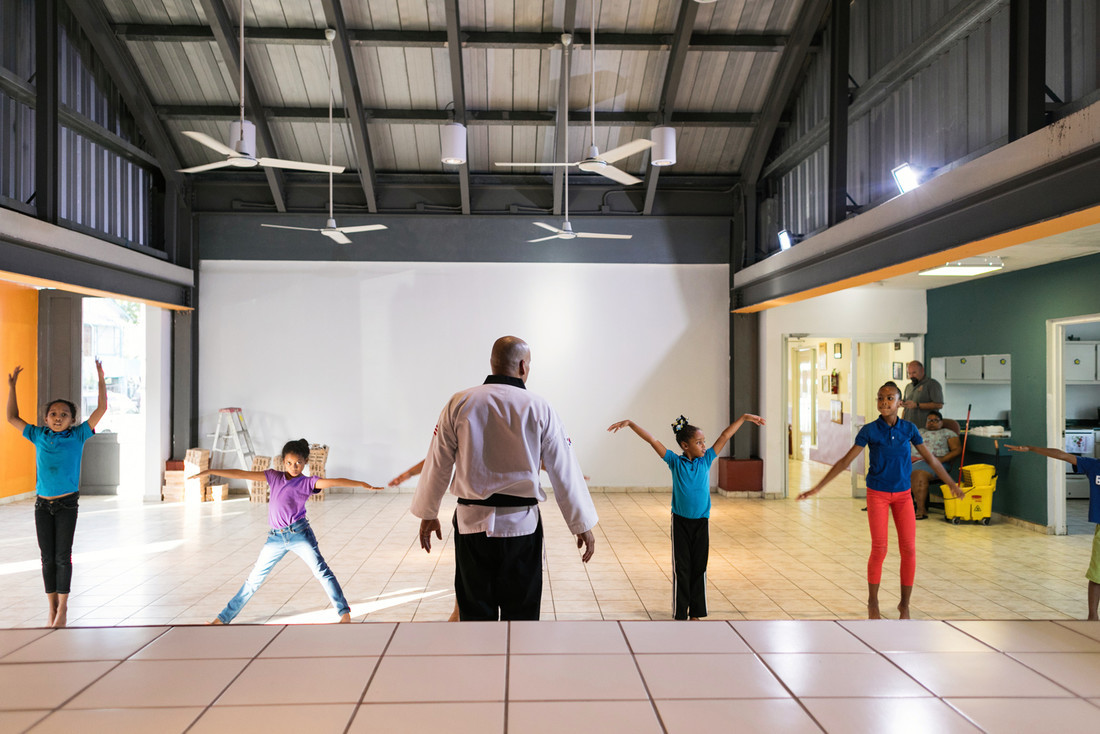 CAÑO MARTIN PEÑA - BUENA VISTA COMMUNITY CENTER
Community participation was paramount to make sure the solutions worked well with the specific needs and expectations of the residents they are serving. ©Monica Felix 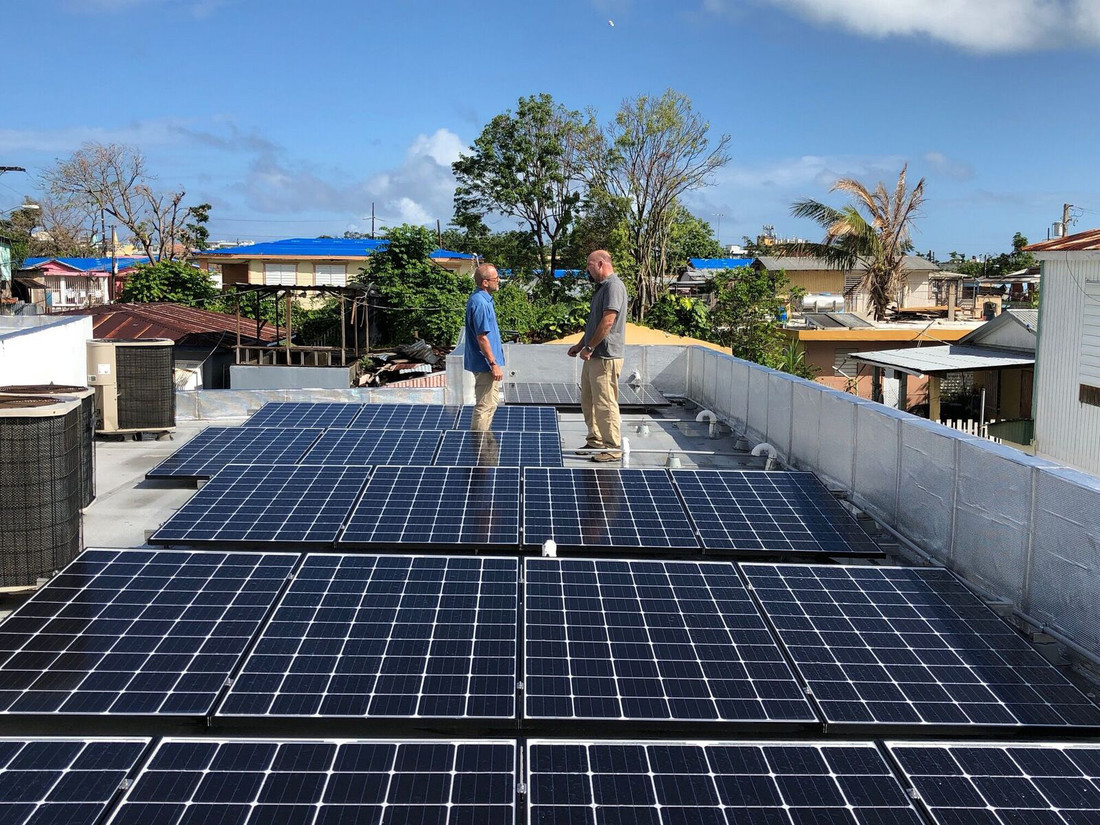 Jonathan Marvel & Luis Carlos Robles at The CAÑO MARTIN PEÑA - BUENA VISTA COMMUNITY CENTER
Marvel installed four solar hubs within this urban community at existing community centers. El Caño is formed by 8 historical communities that surround Caño Martín Peña: a mangrove-lined, natural channel that is the backbone of the San Juan Bay National Estuary. The 8 communities are well organized and are represented by G8 or the Group of 8 – a nonprofit organization. Their headquarters is one of the centers solarized by our intervention. 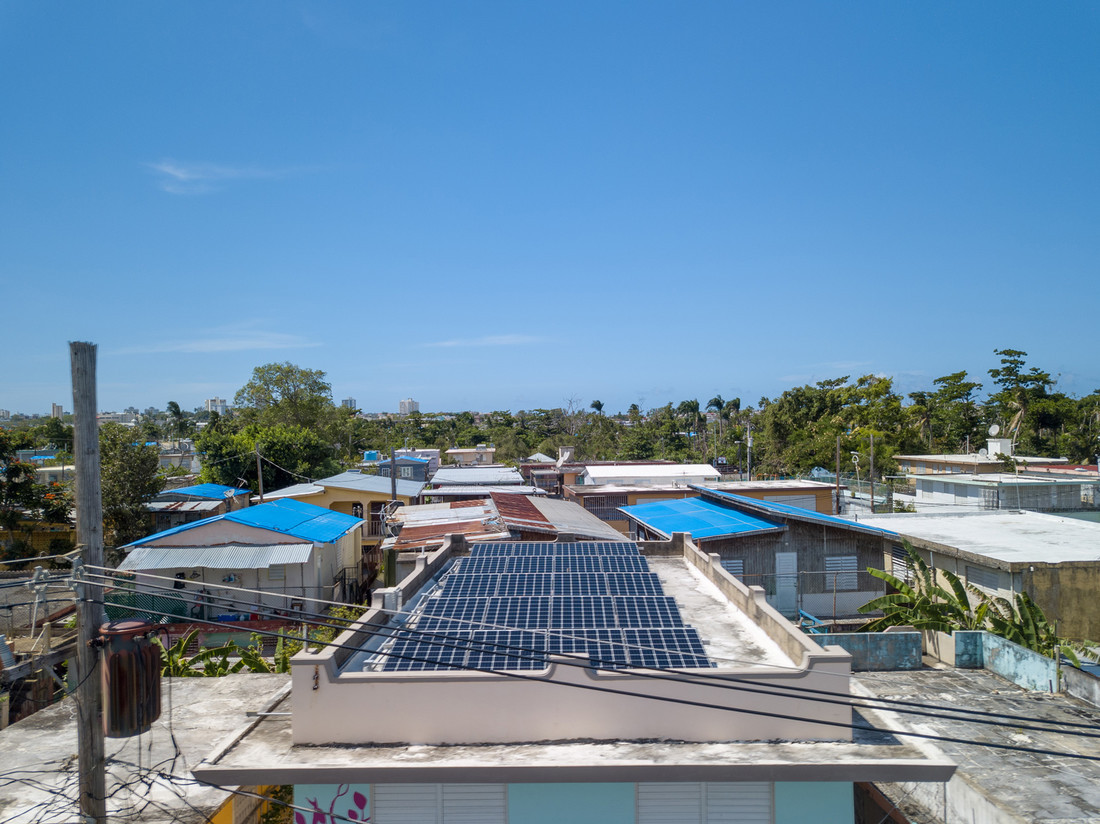 CAÑO MARTIN PEÑA - LAS MONJAS COMMUNITY CENTER
The typical solar hub installation is composed of 20 solar panels, 20 microinverters, two lithium-ion battery-inverter systems, a gateway, and the necessary cable connections. Often a new, separate electrical panel is installed to handle just the critical loads of the building. This system is able to provide 5 to 6 kW of electricity and around 20 kWhr of energy storage. This is sufficient to power a refrigerator, lighting and ventilation and supply power to water filtration systems, electronics and communications equipment. ©Diana Serrano 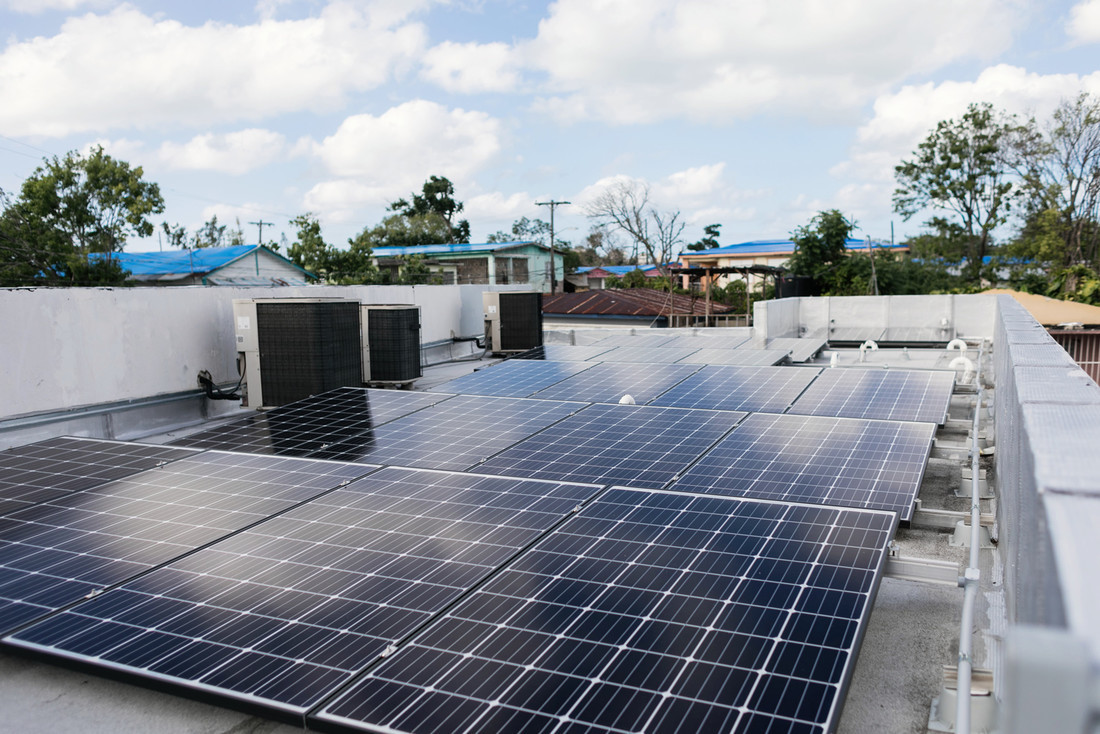 CAÑO MARTIN PEÑA - BUENA VISTA COMMUNITY CENTER.
Having a reliable and resilient power source is essential to support community resilience at large. In the months-long blackout that followed Maria, the solar hubs in El Caño created illuminated and ventilated spaces where community organizing and recovery took place. Even though electricity is now restored, the solar hubs continue to support resilience and lower the operational costs of these community centers. ©Monica Felix 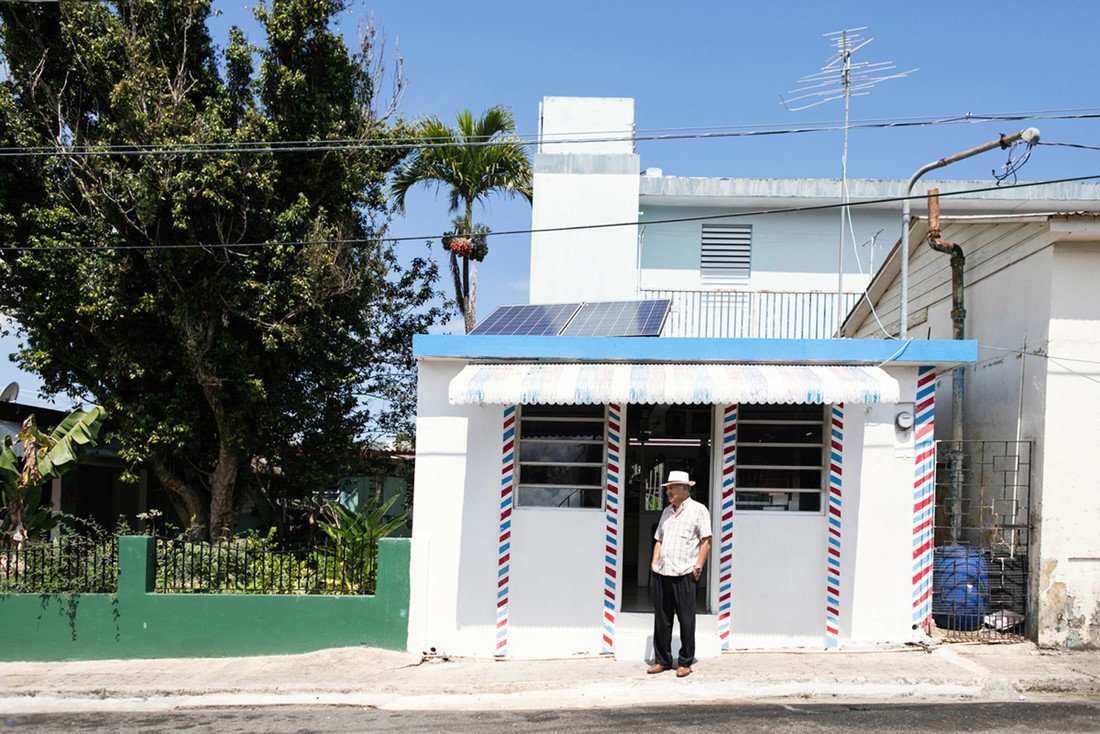 INDEPENDENCE FROM THE CENTRALIZED FOSSIL-FUEL POWER GRID
Solar power can contribute significantly to urban sustainability and resilience at all scales. By providing a consistent and reliable source of electricity under all conditions, photovoltaic systems can help community centers, service providers in towns, and cities, to have energy at all times, even after a natural disaster. 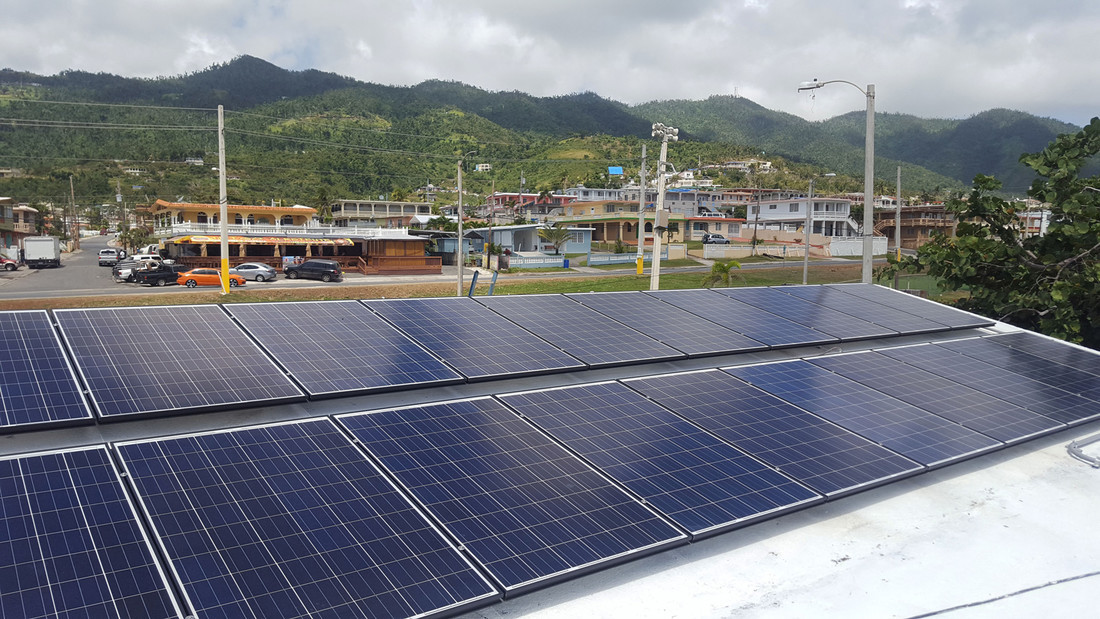 Atmar Educational Center, Maunabo
Our project’s mission is to improve the lives of the residents of Puerto Rico by increasing the capacity of communities to address their critical needs; increase local access to knowledge, tools, and resources; and foster equitable social and infrastructure systems. 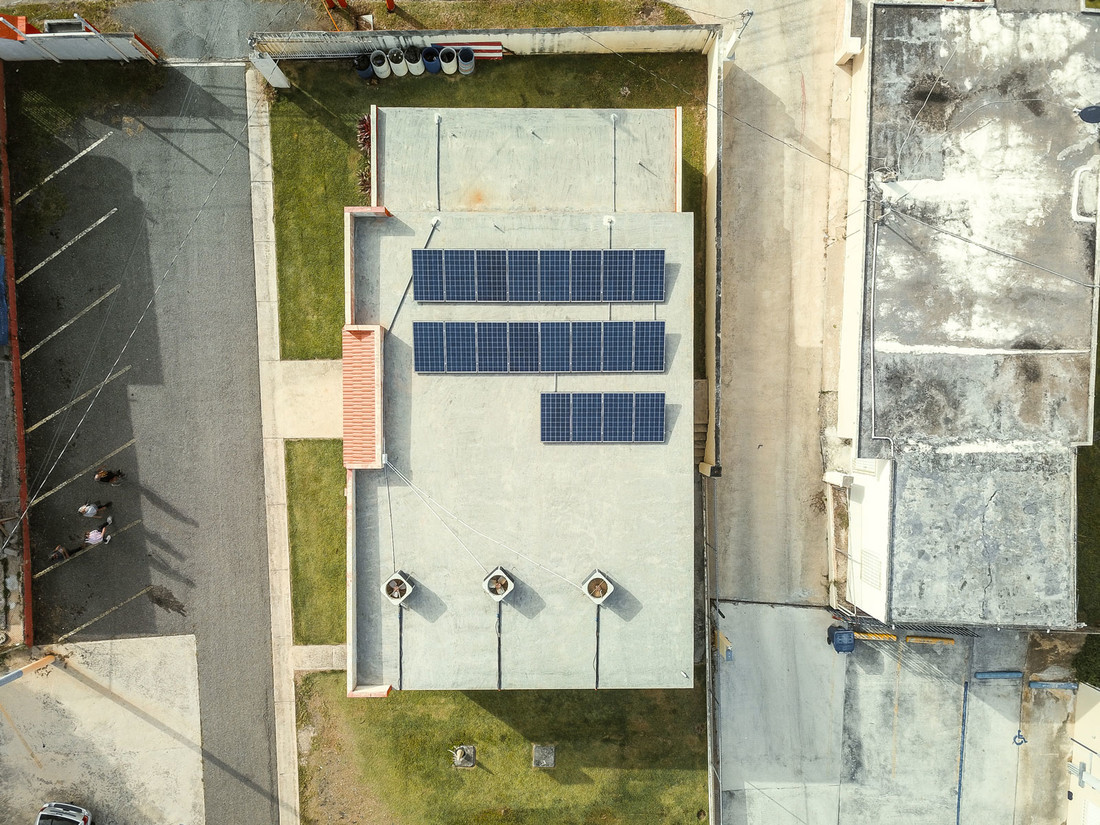 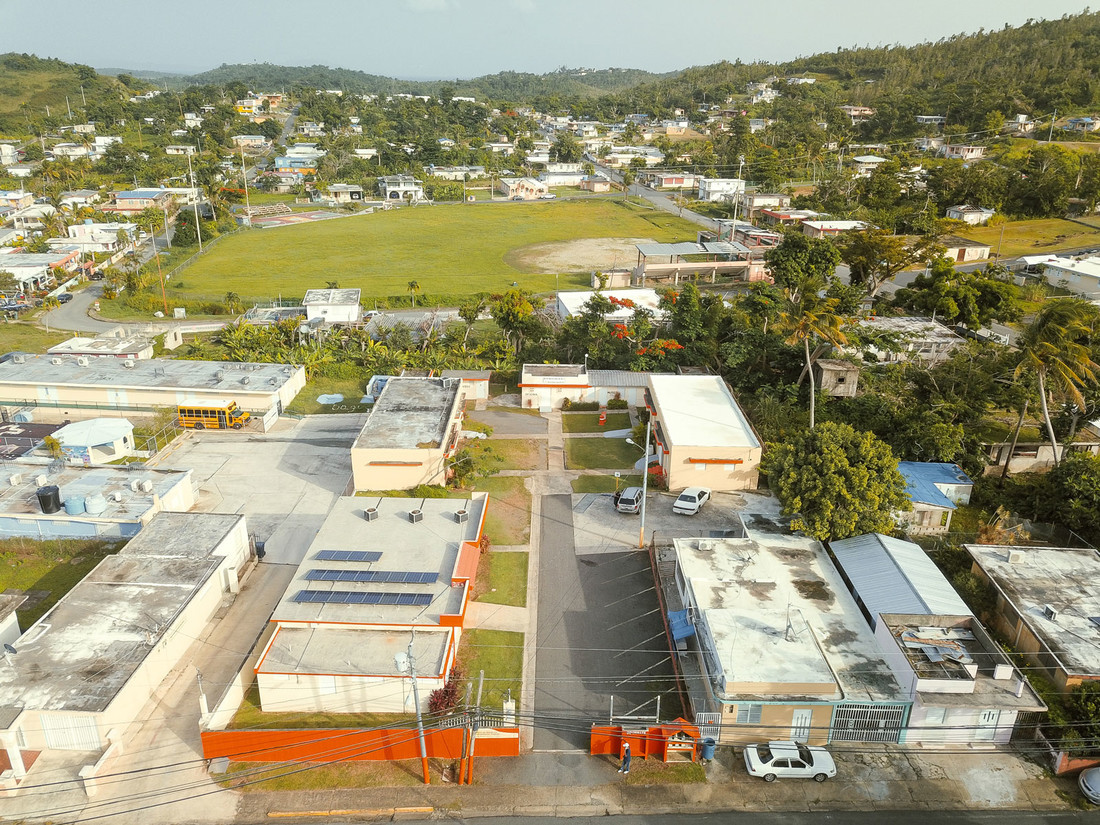 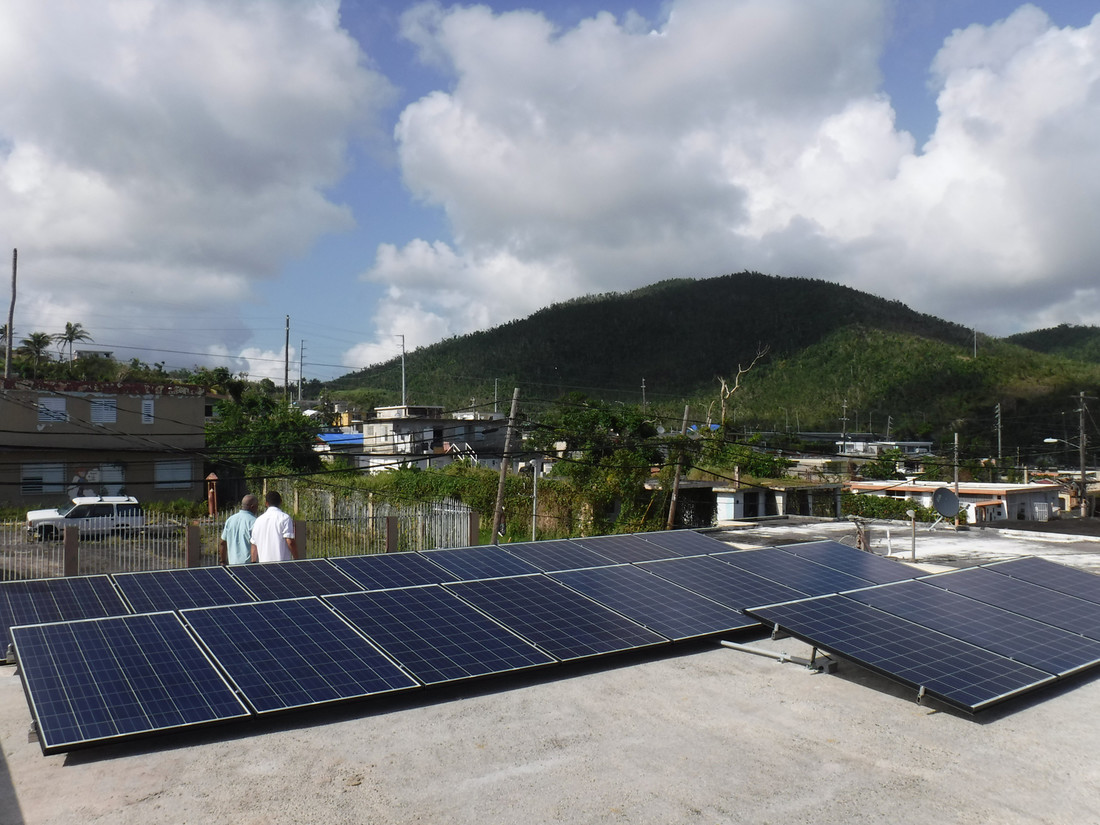 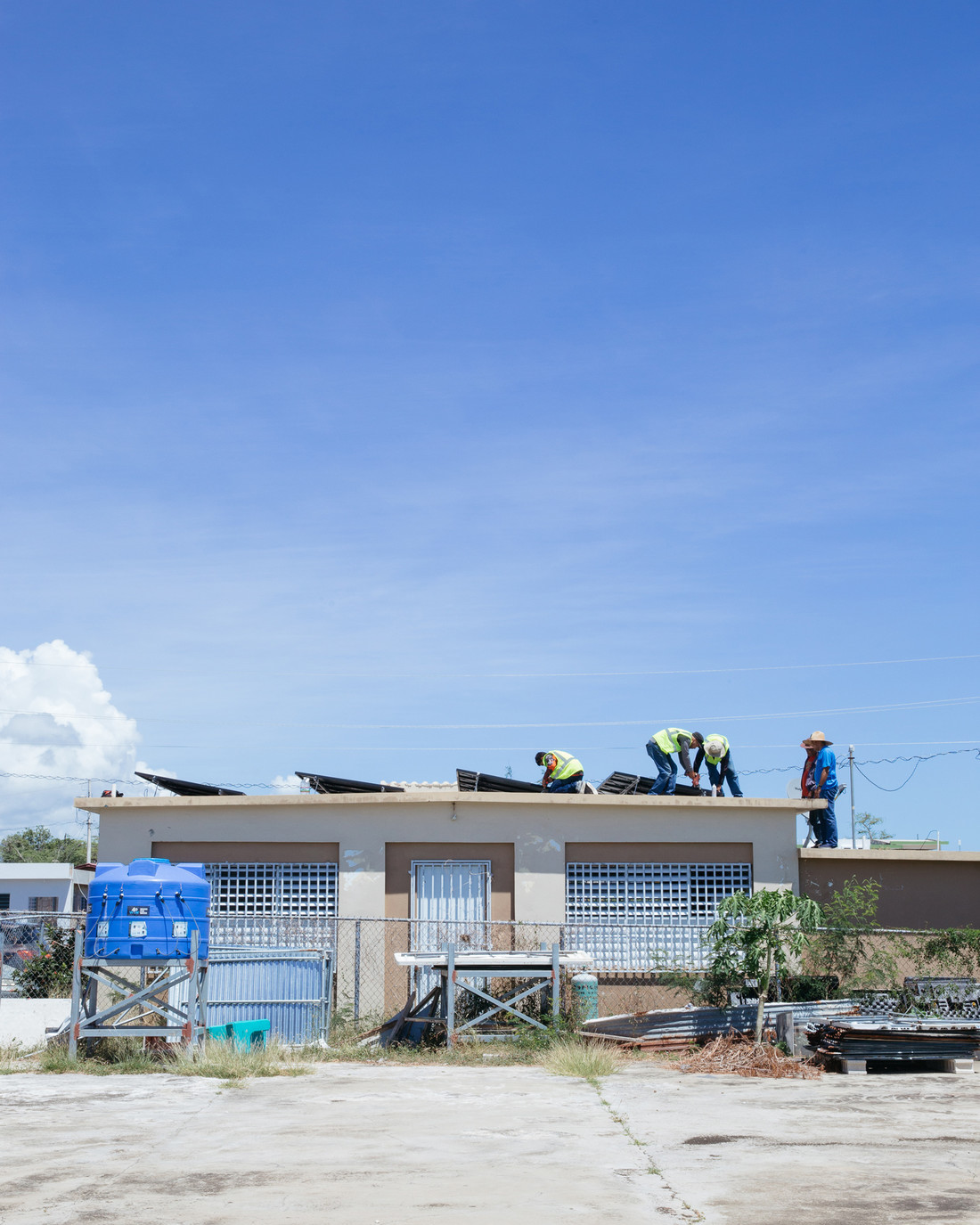 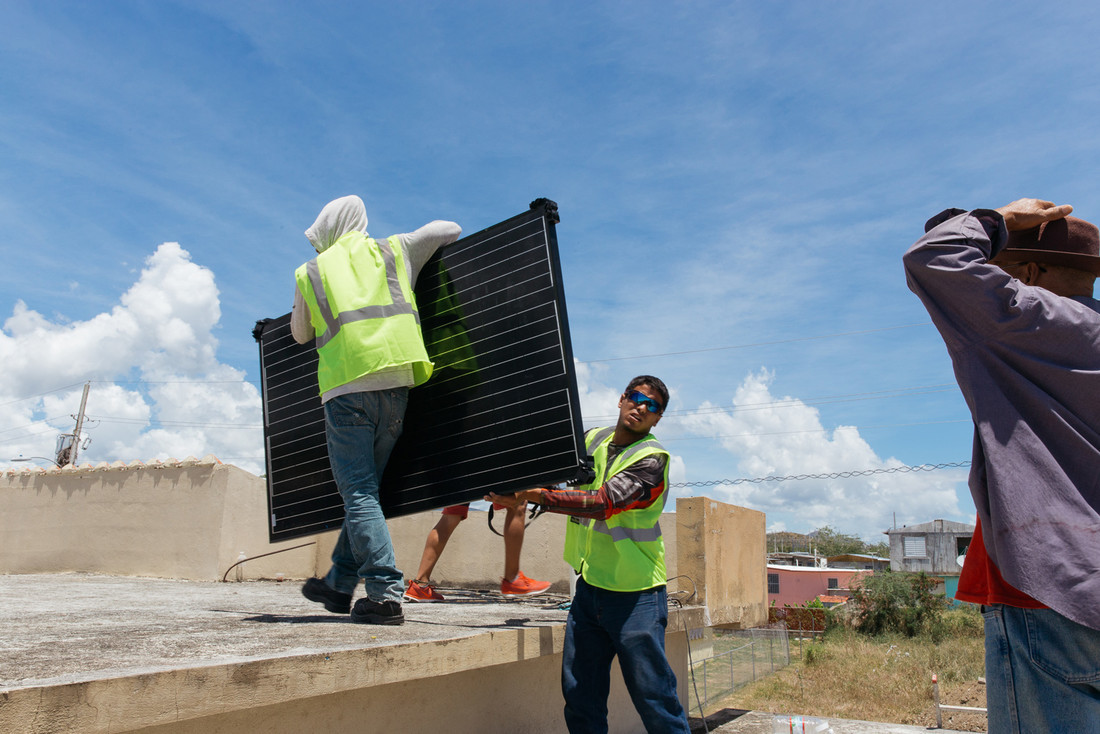 El Coqui Community Center, Salinas. © Scott Lahan
Our solar interventions resulted in immediate improvements to the quality of life after Hurricane María and represent a lasting contribution to urban sustainability in Puerto Rico 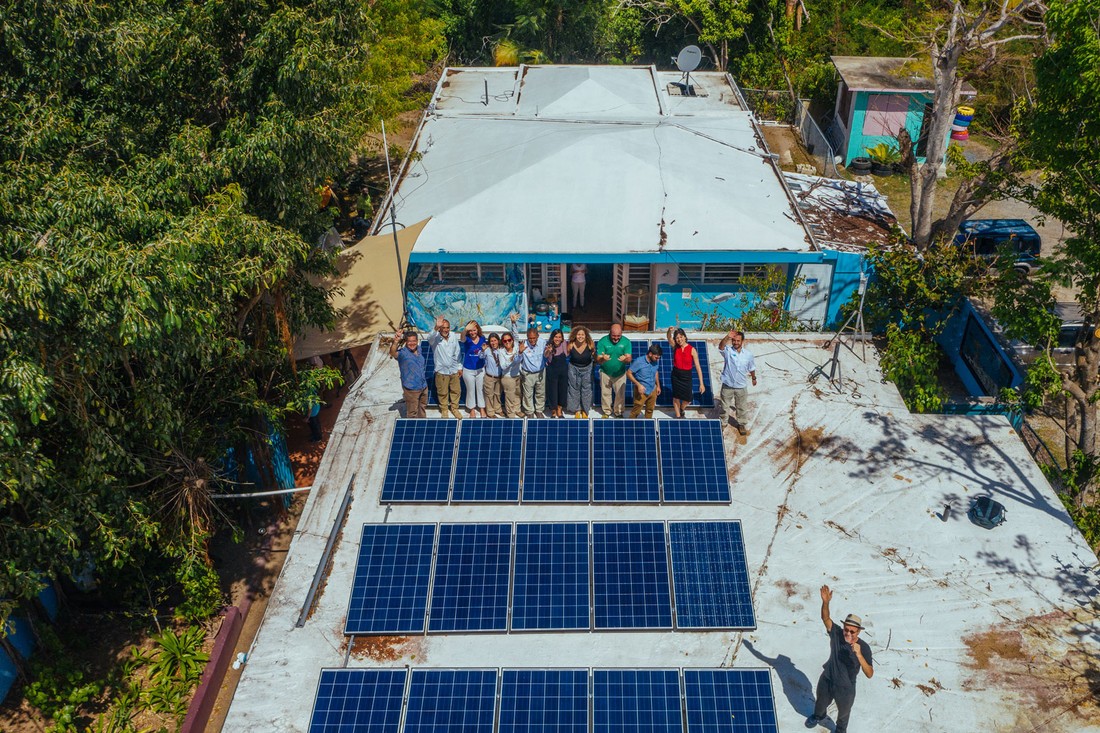