A look at St. Ann's Warehouse

Critic’s Review from the Desk of Fred Bernstein 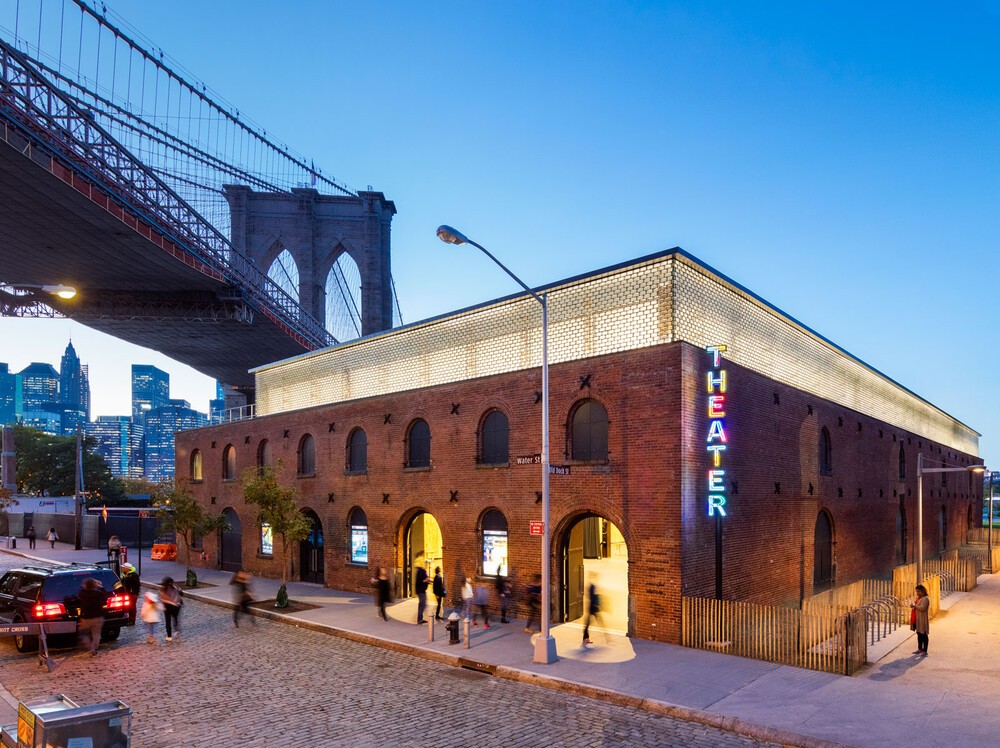 Recently I saw two performances at St. Ann’s Warehouse. One was a drama, imported by the theater’s artistic team from Germany to rave reviews. The other was the un-rehearsed, but no less compelling, movement of people through the building’s lobby before the show and at intermission.

The heart of St. Ann’s Warehouse is a black box theater, which directors can configure as they choose. The lobby is a different kind of box, designed by Marvel Architects as a place configured by its occupants every night. Forty feet wide and eighty feet long, it is large enough to accommodate movement in many directions simultaneously. But it is more than just big large: the room’s proportions -- it is practically a double cube -- make people comfortable as soon as they walk in.

What people see, when they enter the room at one end, is a distant wall covered in richly textured plywood. The use of that material instantly telegraphs that this is an informal space (as do the concrete floor and ceiling hung with pipes and ductwork). In front of the plywood wall is a poured-in-place concrete bar; no one ever enters the room and asks, “Where can I get a drink?” Though only loosely programmed (with stools surrounding high round tables), and made to accommodate Brownian motion, the room is nonetheless a model of organizational clarity.

The lobby’s long, East River-facing wall is from the 19th century: stout brickwork interrupted by arched doorways left over from the building’s origins as a tobacco warehouse. The wall conveys solidity and establishes ties to the past. The lobby’s other long wall is painted matte black, a preview of the featureless, configurable theater behind it. It’s as if, across the width of the room, the mercantile city of the 19th century gives way to the post-industrial city of the 21st, with 40 feet representing 150 years of urban evolution.

As built by the Lorillard family in 1870, the building was distinguished by the arched brick openings on all five of its floors (for moving merchandise in and out quickly) and by its unusual trapezoidal shape. It was largely intact when photographed by Berenice Abbott in 1936, but it soon began to suffer a series of indignities: First its upper stories were removed to avoid the requirements of modern fire codes. The two remaining floors were damaged by arson. Finally, in 2000, its roof and wooden interior framing were removed, leaving it as an open-air ruin. And that’s how many New Yorkers remember it from the early years of the 21st century, when it was a kind of found object of pre-modern proportions and uncertain purpose.

After 2000, the construction of Brooklyn Bridge Park began bringing the DUMBO waterfront back to life, and a deal was made for St. Ann’s Warehouse -- a theater founded in 1980 in a church in Brooklyn Heights -- to move to the tobacco warehouse (or, rather, the space within the disembodied walls of the onetime tobacco warehouse). The architects’ first big design decision was to square off the trapezoid, enclosing about two-thirds of the space and leaving the remaining third, a triangle, exposed to the elements. A garden was designed for that triangle by Michael Van Valkenburgh Associates, the creator of the much larger Brooklyn Bridge Park.

But to accommodate the theater, the building’s roof needed to be raised above the tops of the existing brick walls. Marvel, in a masterstroke, added an eight-foot-high clerestory of clear glass brick on all four sides of the building. By day, the glass brick seems contextual, its running bond pattern echoing the brickwork of the tobacco warehouse and neighboring structures. And at only 1/4 the height of the brick walls, it doesn’t change the flavor of the building, which still reads as an industrial artifact. Yet especially at night, when it glows from within, the glass-brick clerestory makes clear that something exciting is happening inside.

The simplicity of organization serves another purpose: In the event of a flood (like that created by Hurricane Sandy in 2012) double doors can be opened to allow floodwater to run through the space and exit on the other side. Most of the materials (including the brick exterior walls and new concrete floors) would be largely unaffected; the other materials chosen by Marvel, mainly plywood, could be replaced quickly and inexpensively.

If there is one problem with the building, it is the confusion over where to enter. Van Valkenburgh’s garden seems designed as a place for contemplation -- or maybe for having a drink during intermission on a balmy evening. Large curved planting beds make it difficult to walk directly through the space.

And yet it has become a kind of entry court that doesn’t lead to a real entry.  Anyone approaching the building from the direction of the Brooklyn Bridge enters the garden, sees glass doors leading to a vestibule (a dogleg off the lobby), and tries to open them, unsuccessfully. Usually there is pounding on the glass. Eventually the decision is made to walk around the perimeter of the building looking for doors that open, which these days are marked by a sandwich-board sign proclaiming “main entrance.” Perhaps a more permanent solution is in order. Indeed, in late 2019, the theater commissioned Brooklyn artist Tom Fruin (known for his Watertower installation on the roof of 20 Jay Street, a few blocks away) to create new neon signs for the theater’s stage door and main entrance. Help is on the way!