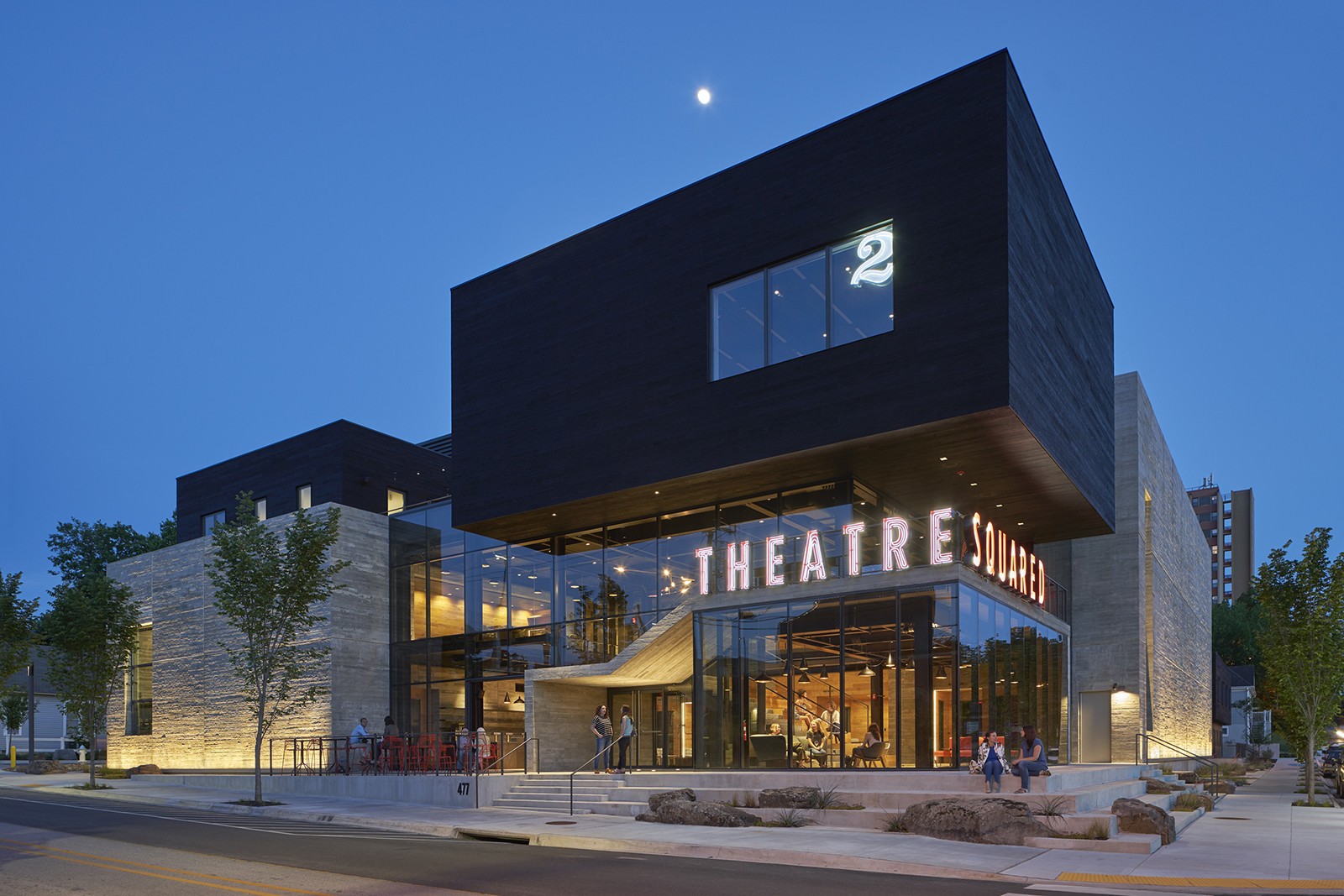 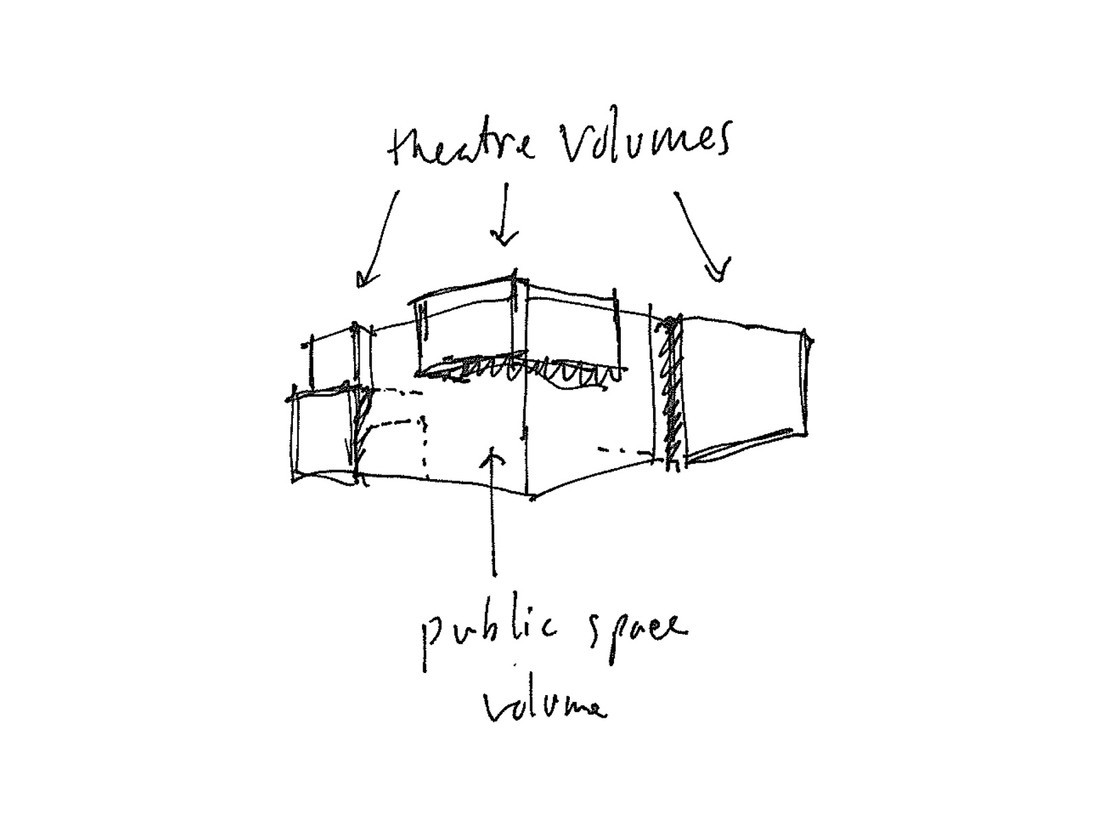 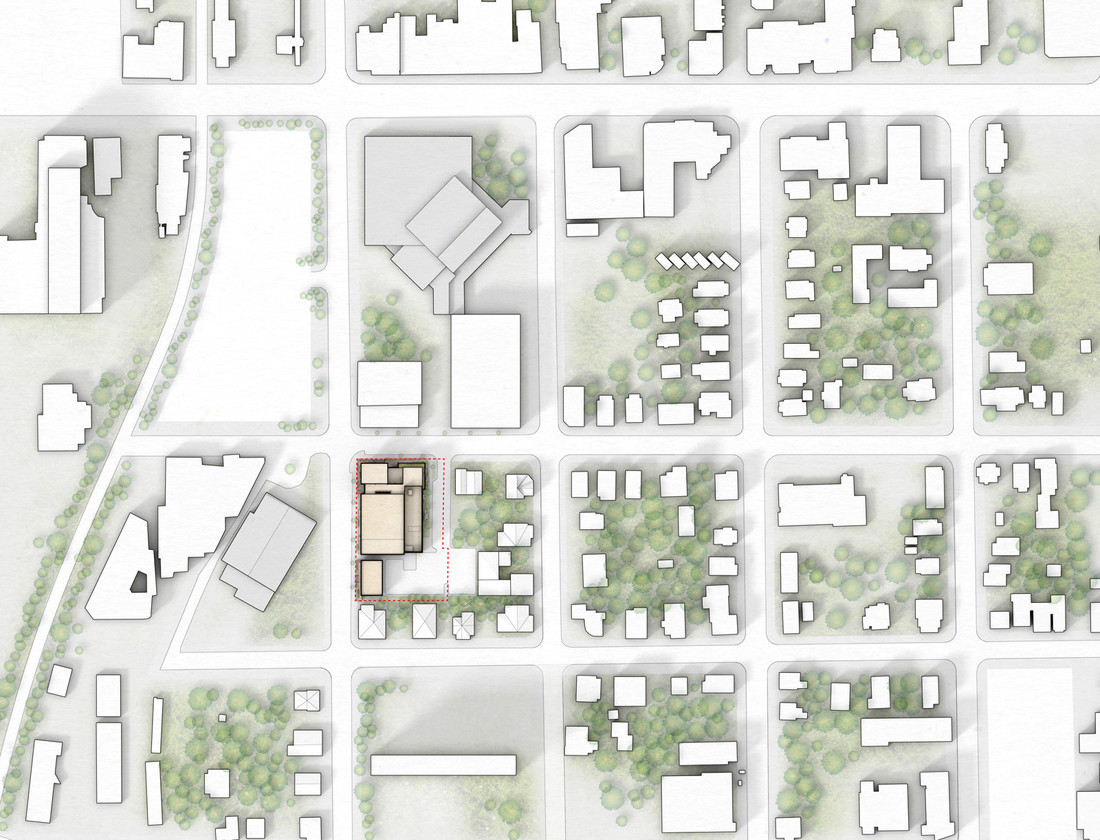 BUILDING FOR THE FUTURE OF FAYETTEVILLE
The building also plays a significant role in extending the arts and cultural program of the city as whole. Situated a block South of Dickson St, Fayetteville’s main commercial artery, and in between the Walton Arts Center and the city public library, the building pulls the public south down Fayetteville’s emerging Arts Corridor. A planned park across the street from the theatre will replace an existing parking lot and further energize this portion of the city allowing the theatre to engage pedestrians and bikers, families and individuals, and the youth and adults alike. 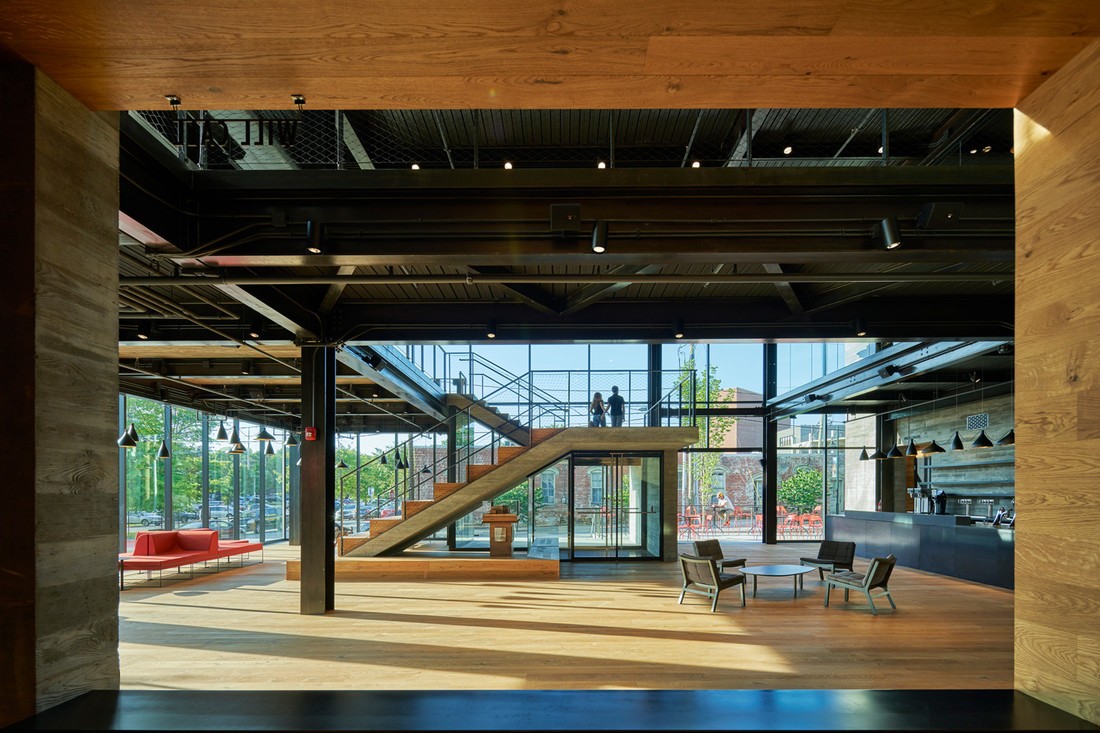 COLLABORATIVE DESIGN PROCESS
The design was the result of an intensive options-based and collaborative process with the client. Design principles, derived from the company’s vision statement, were established early on and carried through at every stage of design. As an example, the concept that the performance space is the “beating heart of the building” resulted in the concrete envelope of the theatre being left exposed and visibly expressing itself on all sides—from the exterior, into the commons, and into the back-of-house corridors—letting passersby, patrons, and actors locate themselves in relation to this building “heart. ©Timothy Hurlsey 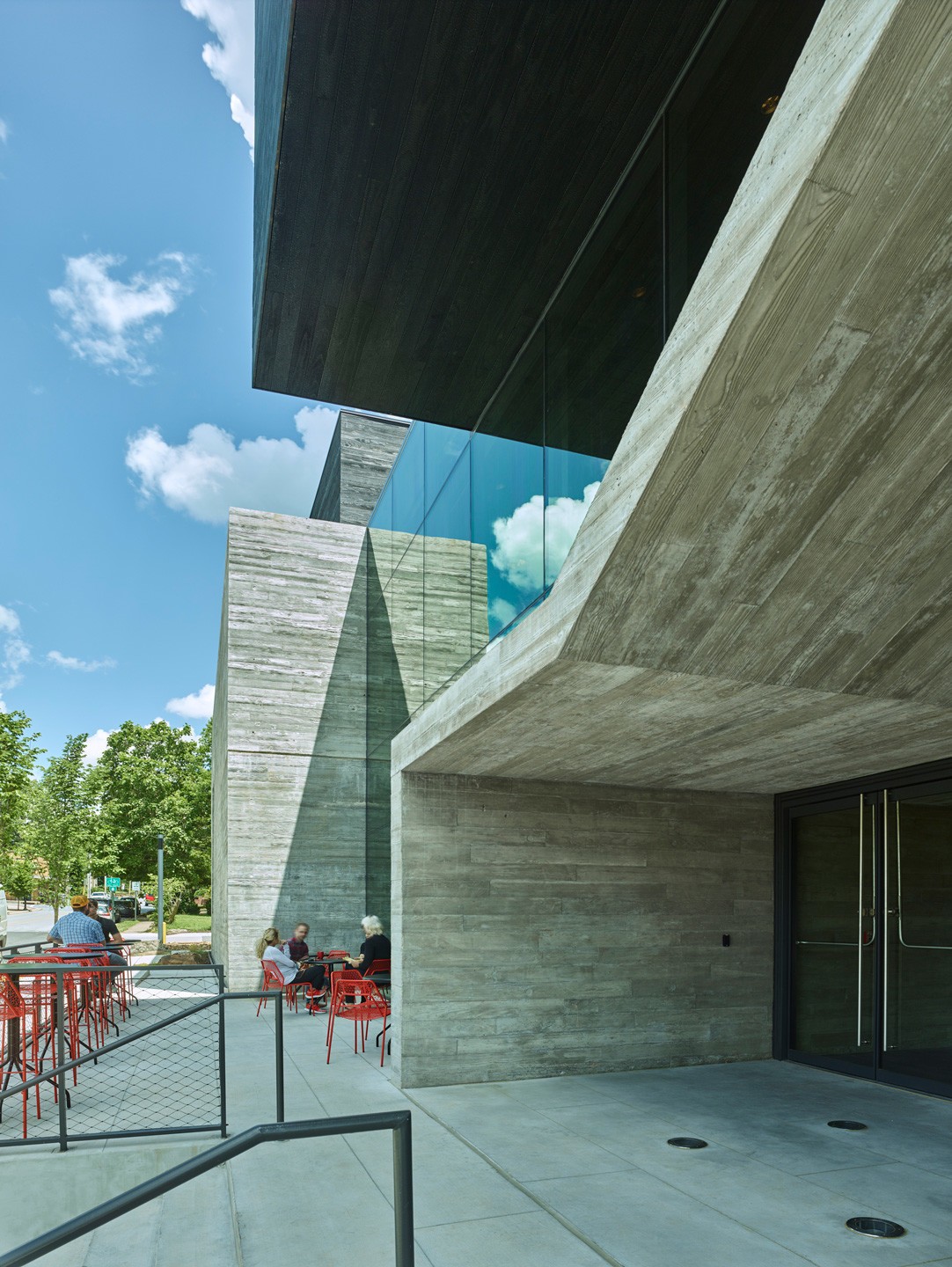 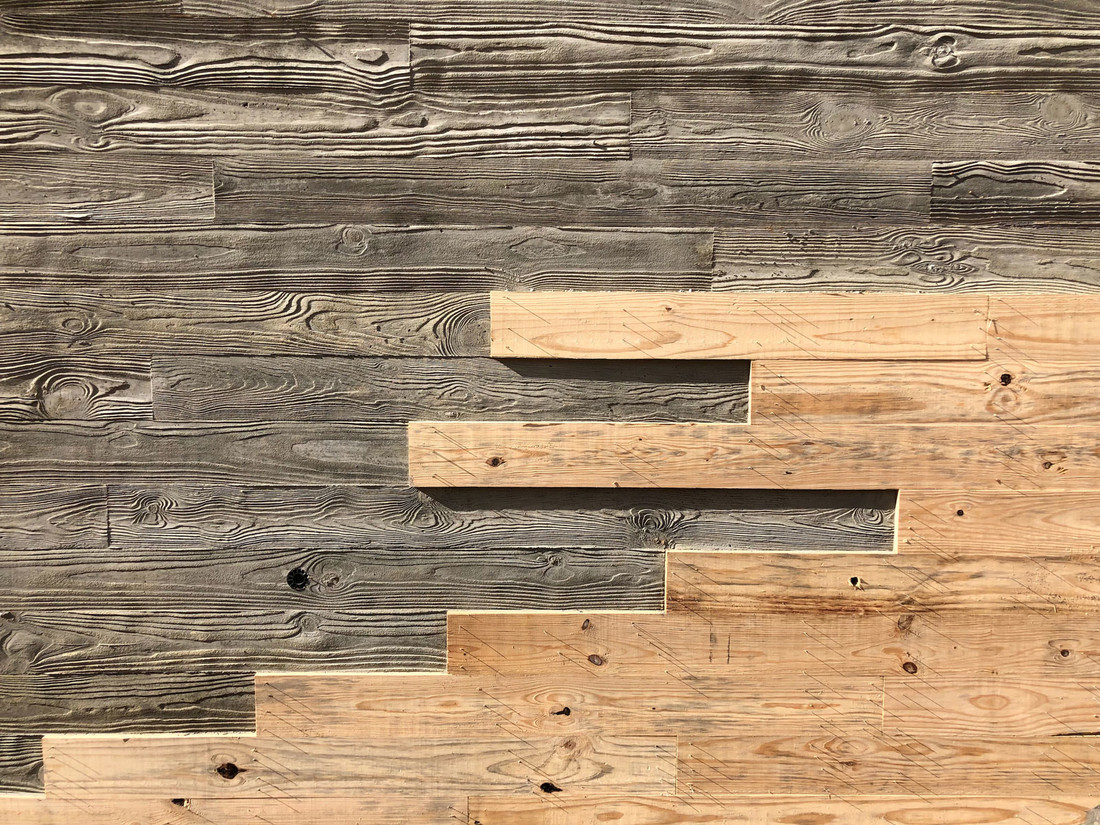 ARCHITECTURE TELLS A STORY
To further the concept of theatres as a place for storytelling, the materials used also tell stories. The various lives that wood may possess—as a raw material, a concrete texture, charred, stained, veneered as plywood, chopped into OSB, as furniture, or walls, or floors—all appear within the building. A story of construction processes is also told—the pine boards used to make the board form concrete envelopes were cleaned, stained, and repurposed as interior finish materials in the Studio and Rehearsal performance spaces. 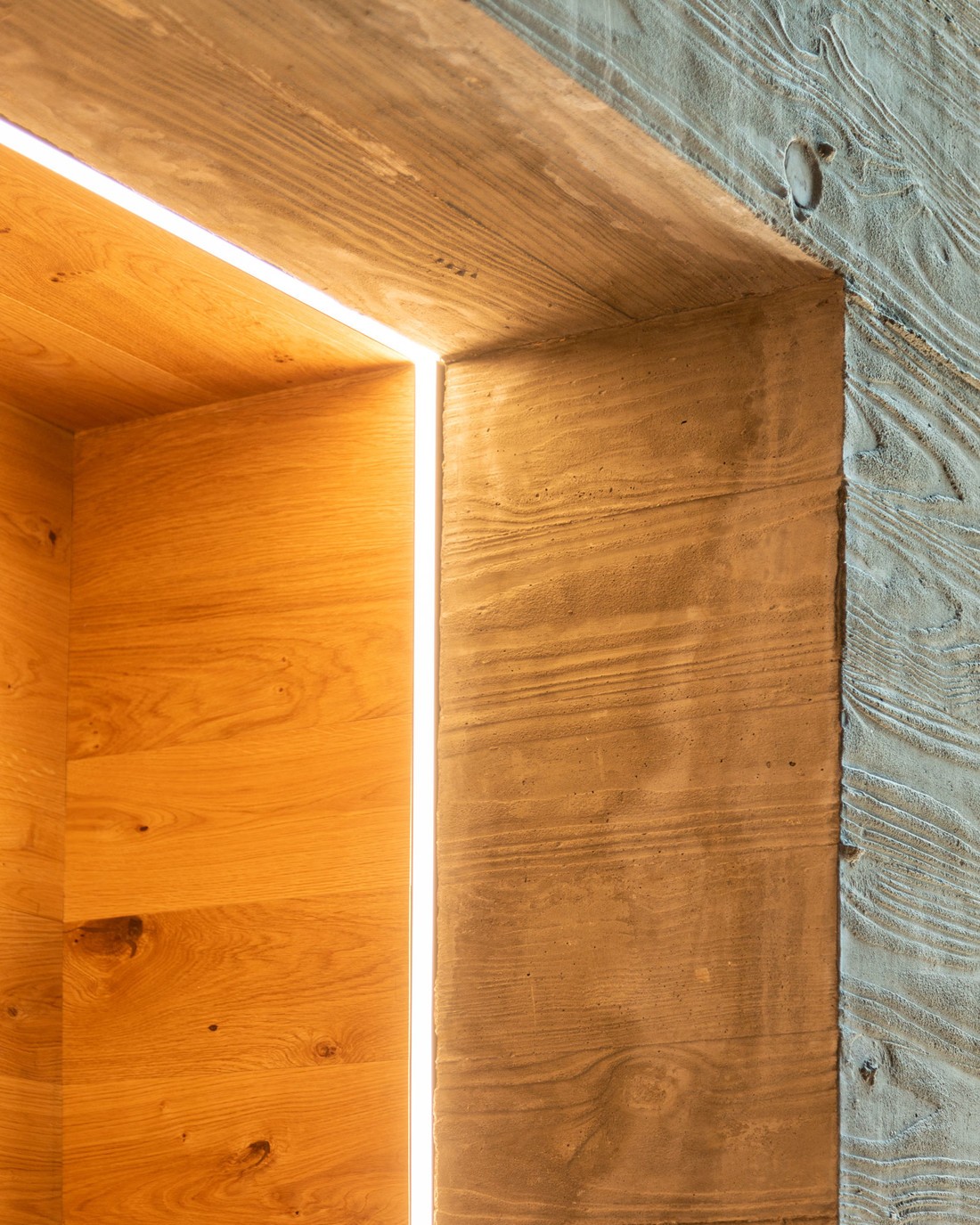 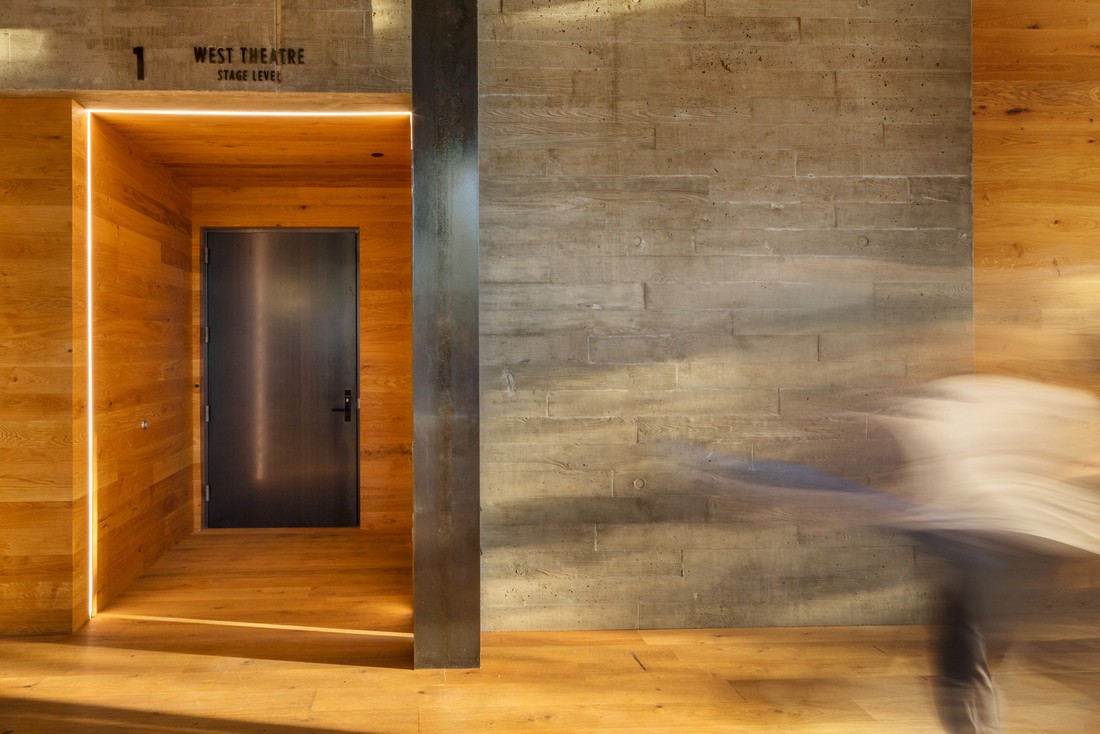 LOCAL MATERIALS AND DETAILS
Furniture was constructed out of trees felled from the site, local Ozark boulders were embedded into the landscaping, and local pine used to make the board form concrete walls was recycled and used as an interior finish. ©Greg Maka 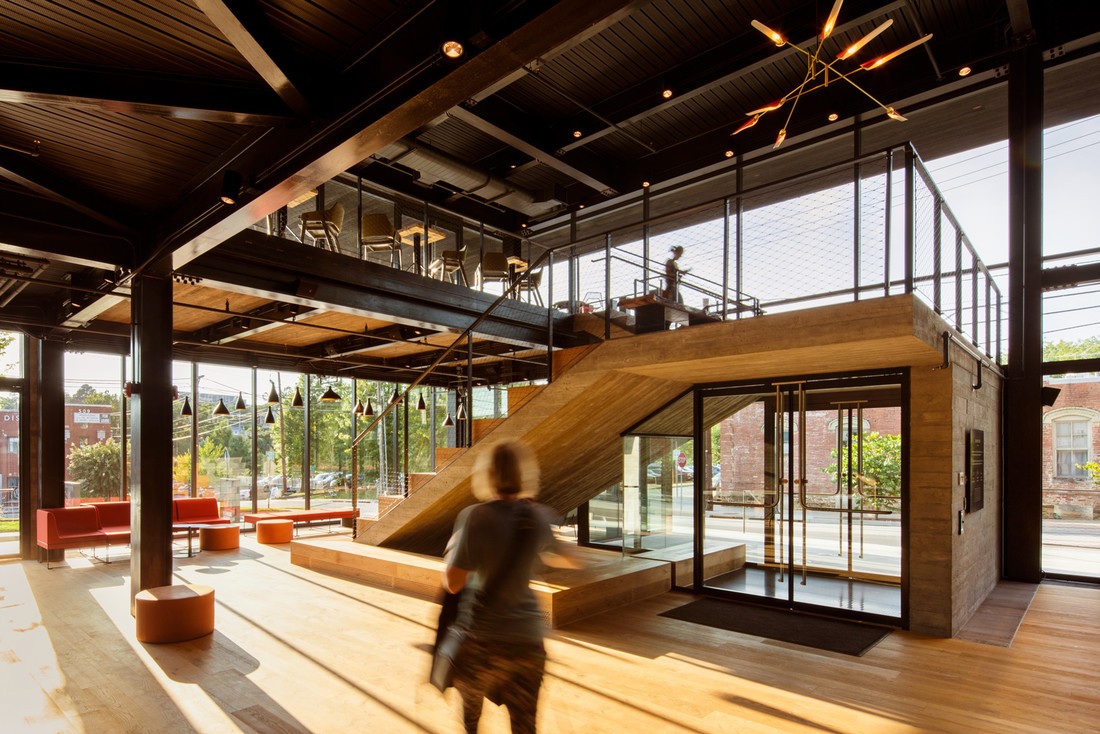 LIVING ROOM FOR THE COMMUNITY
The building “commons”—the space at the corner of the building that links the three performing venues and that faces this future park—opens to the street and invites the public in, serving as a kind of living room for the city. At the core of TheatreSquared’s ethos is the outlook that theatre ought to be enjoyed by everyone. Frequent public programming within the Commons, and a café set to be open daily is intended to broaden the theatre-going audience and entice both residents and visitors to make the space their home. ©Greg Maka 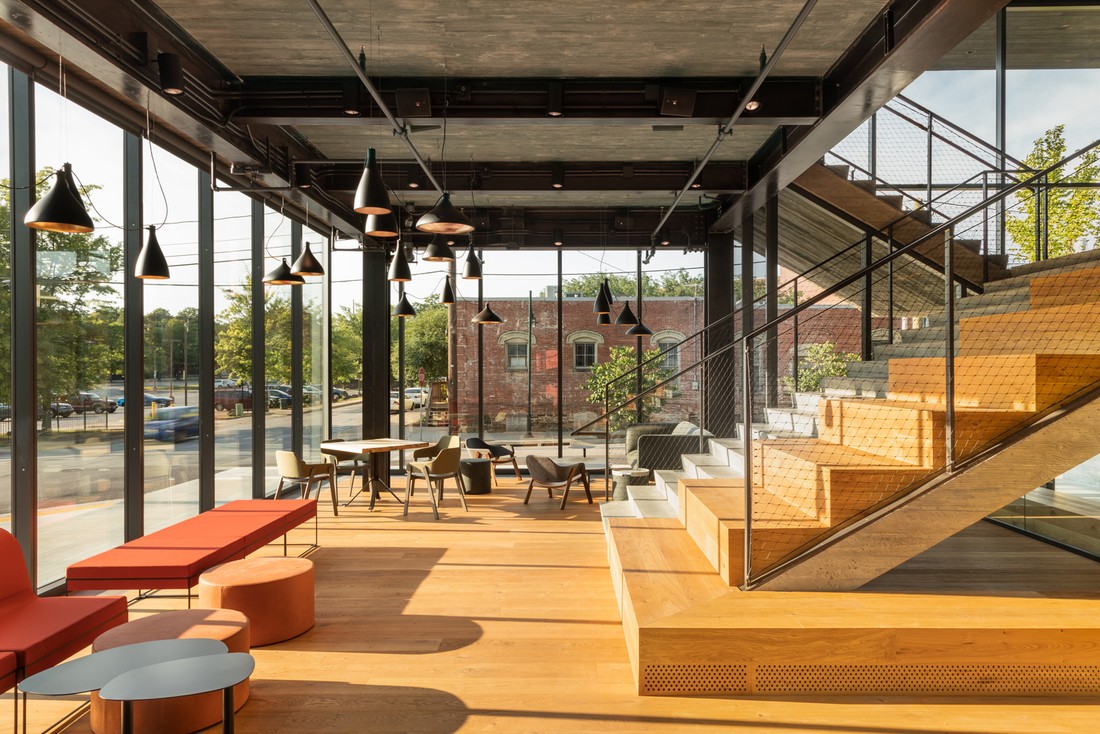 Performance capabilities extend out of the theatres and into the commons with audiovisual and stage lighting systems integrated into the public spaces increasing both performance flexibility as well as the client’s ability to draw the public in. Low-iron glass surrounds the Commons, increasing transparency and connectivity to the street. Exposed structural steel and building systems lay bare the workings of the building and encourage the perception of the space as approachable and unpretentious. ©Greg Maka 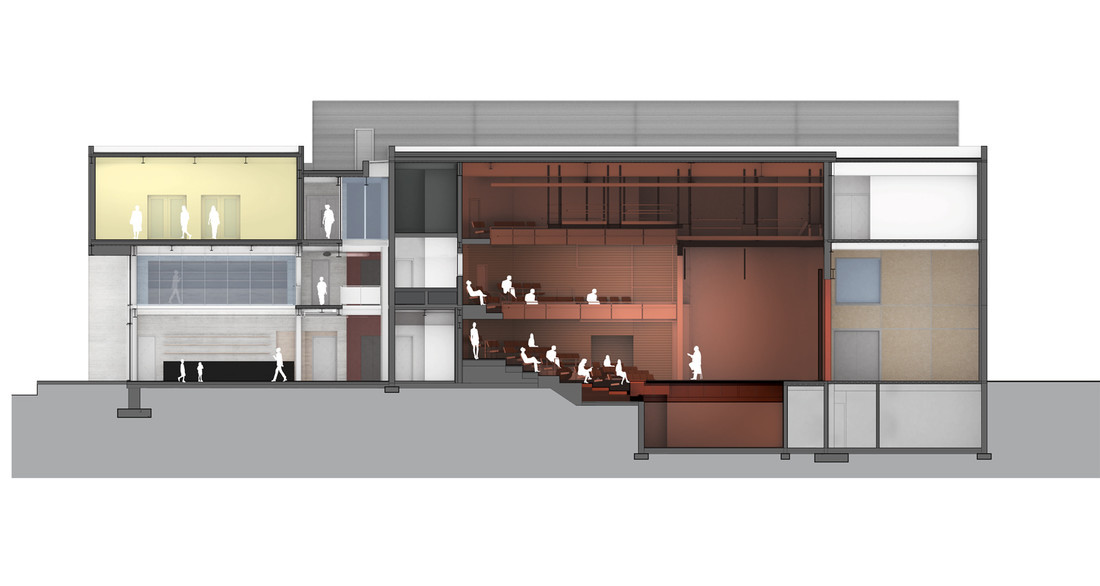 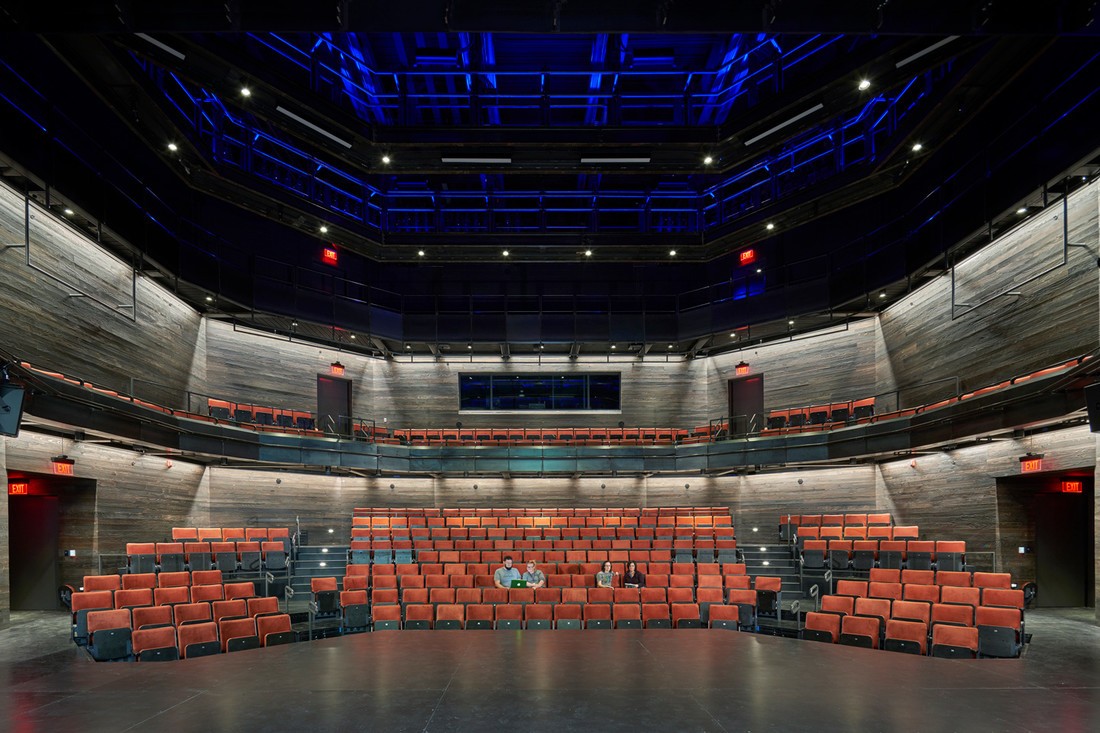 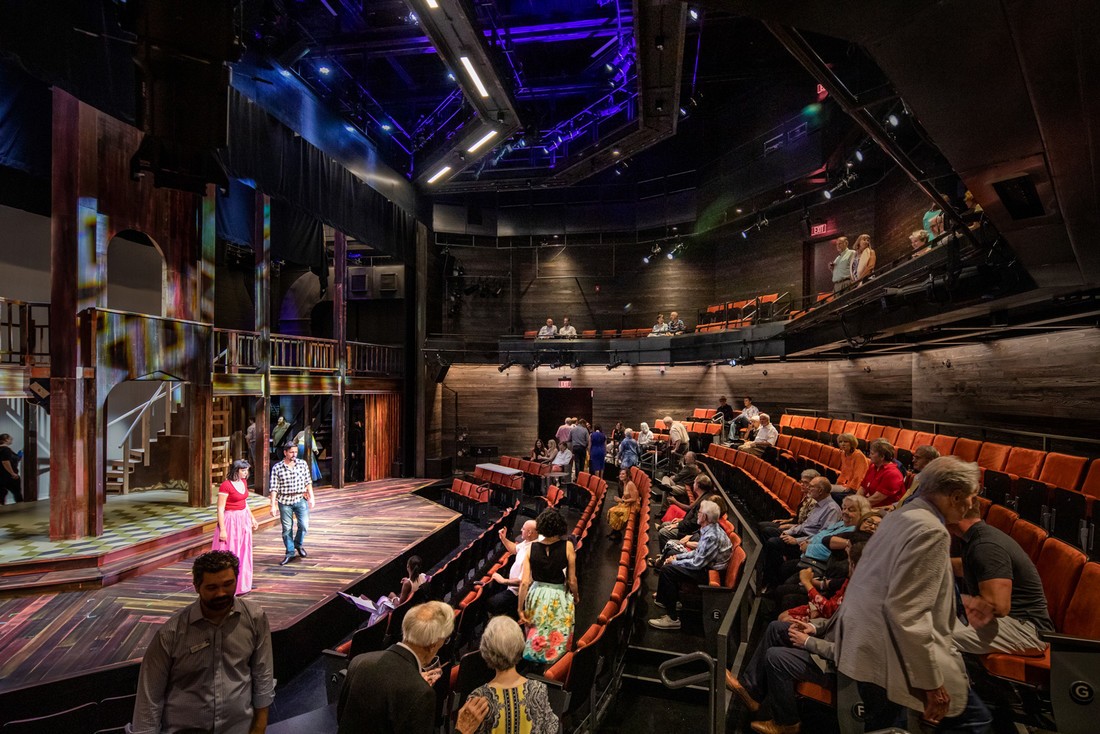 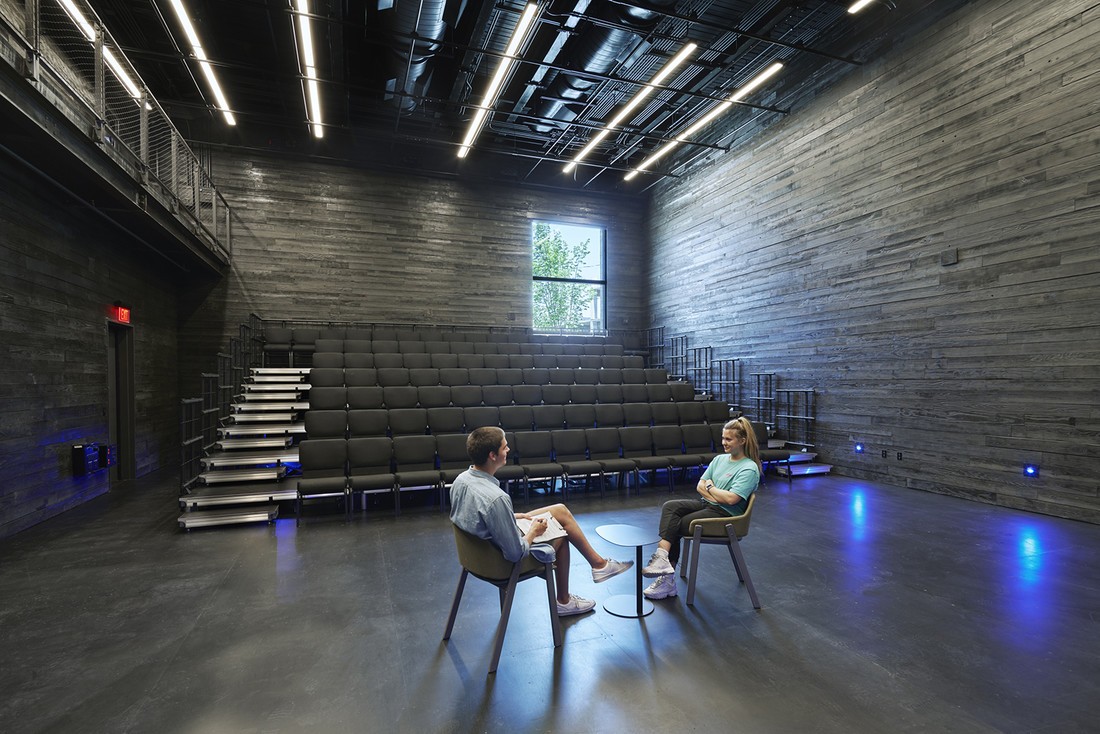 MAIN AND STUDIO THEATRES
TheatreSquared’s previous venue was abnormally wide and shallow resulting in elaborate and extensive stage sets and a simultaneous intimate audience experience. This extra-wide stage shape was replicated in the new main theatre while the audience capacity was dramatically increased by adding a wrap around, two row deep, balcony level while the back row of the orchestra level became only one row deeper than it was in the original space. Audience members enter at the stage level, the same level as the actors—another experiential element that was preserved—further heightening the up-close and personal theatre experience that has become a hallmark of TheatreSquared’s performances. ©Timothy Hurlsey 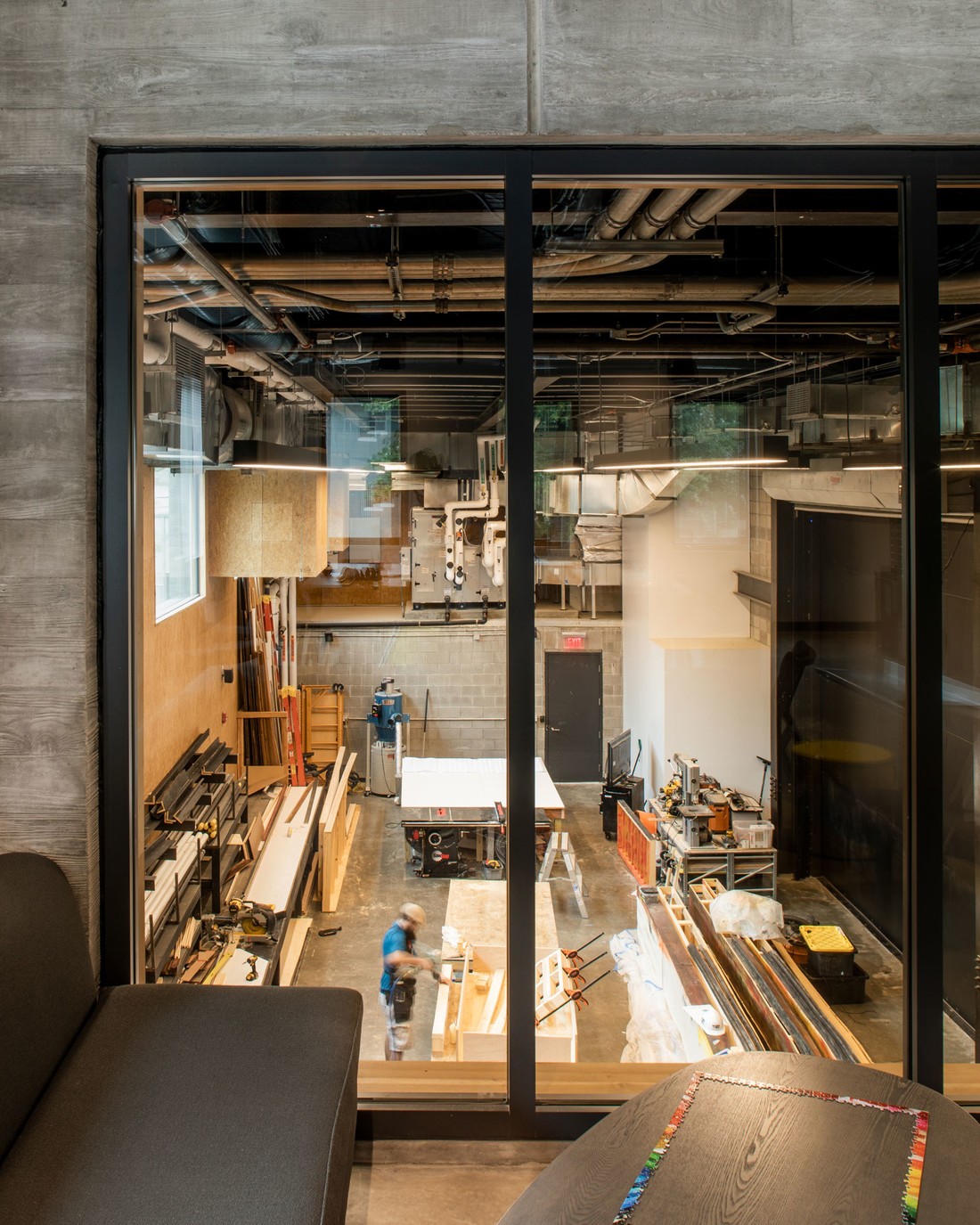 A WORKING BUILDING
The Rehearsal Room, a space which can be flexibly used as an event space as well, projects over the northwest corner of the building. Clad in charred wood with a big picture window that looks north towards the downtown, the inner workings of the building, and the process of mounting a show, are put on display for all to see. The eastern spine of the building houses the guts of T2’s operational needs including staff offices, dressing rooms, a wardrobe shop, scene and prop shops, and a green room. ©Greg Maka 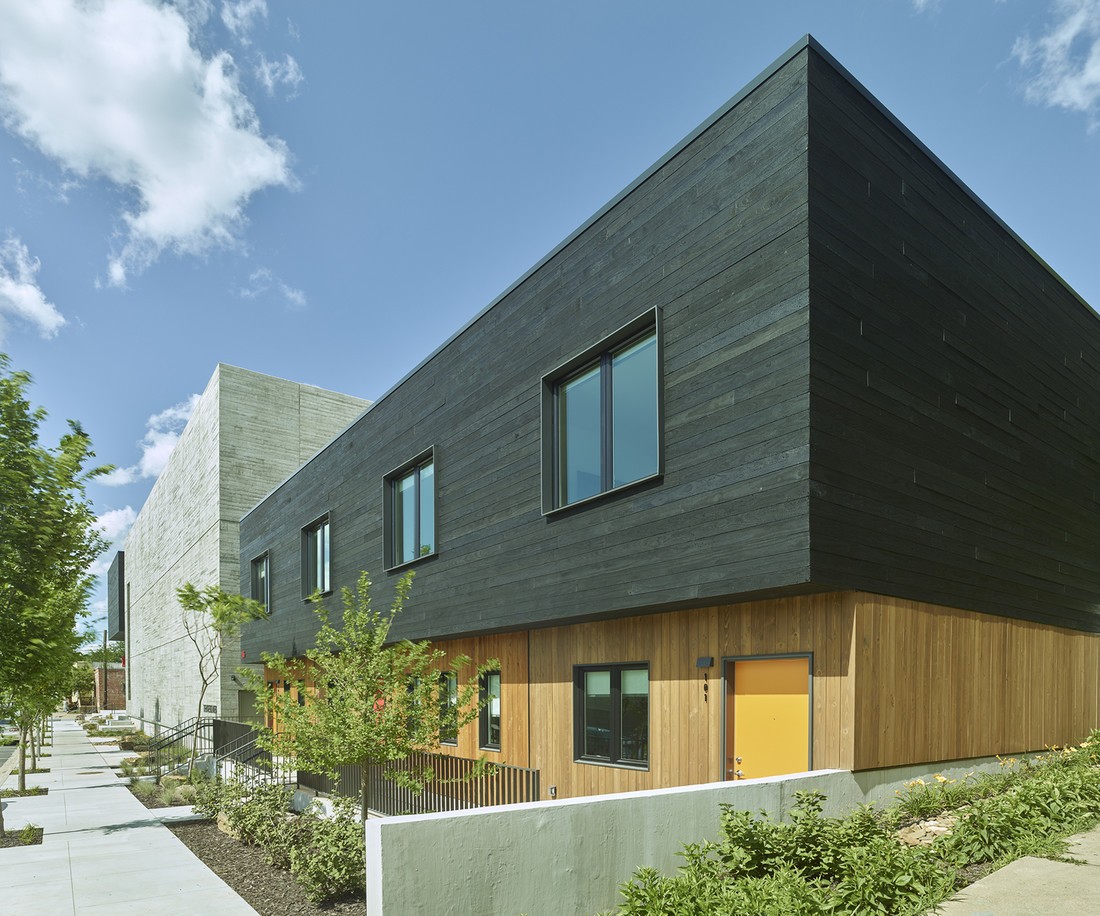 A WORKING BUILDING
Interaction between T2 staff, actors and the public is encouraged with rooms such as the green room and scene shop having views into each other and all rooms having windows to the outside. Industrial materials such as plywood and OSB clad back of house corridors, dressing rooms, and offices increasing the durability of the wall surfaces while encouraging the perception of the spaces as places to be used and lived in—a working theatre. ©Timothy Hurlsey