Few places in New York City provide such a prominent public stage for the display of art, political protest, and a location for assembly and gathering as Union Square. Marvel created a comprehensive vision for the Union Square Partnership to imagine and plan for the expansion of the public spaces of Union Square to continue its image as a world-class destination.

Radiating the Square
The south plaza of Union Square Park is one of the most frequently used and traversed public spaces in the entire City. Tens of thousands of people navigate the plaza on busy days. By extending the granite paving radials beyond the current curb line, the plan acknowledges this attraction and commits to a design feature that seeks to extend beyond the Park limits. 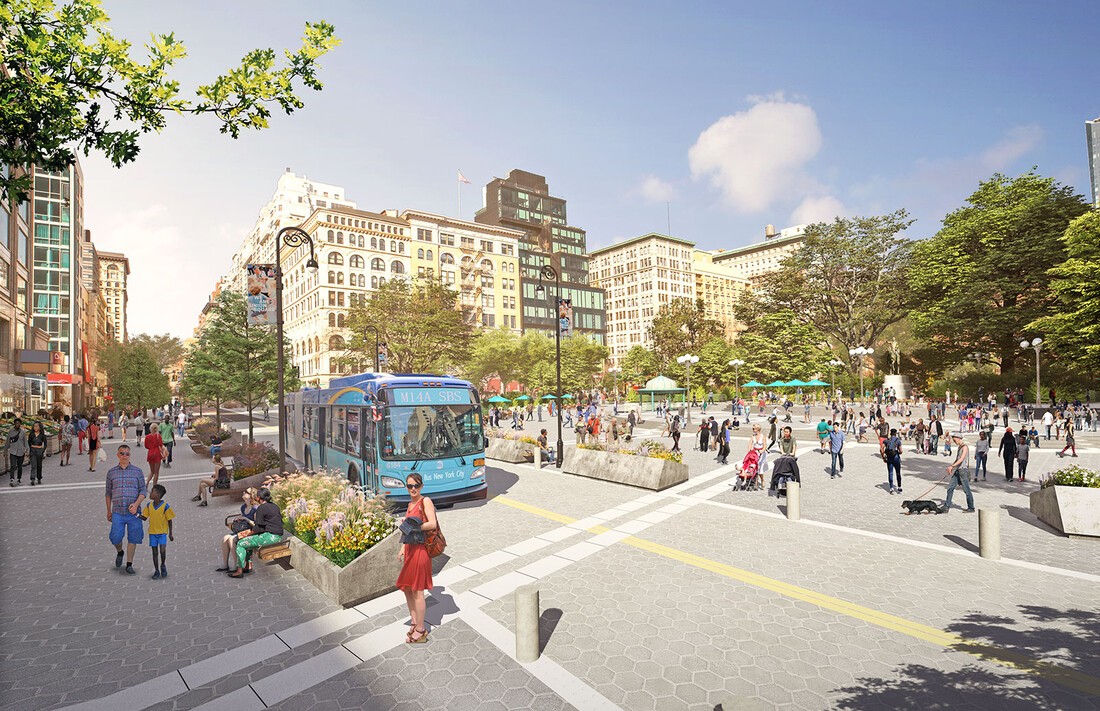 14th Street Shared Street
To connect Union Square to the surrounding building fabric the streetscape would be raised between 4th Avenue and University Place creating a shared street and flush curb condition to encourage a more coherent and unified public space experiences throughout the district. 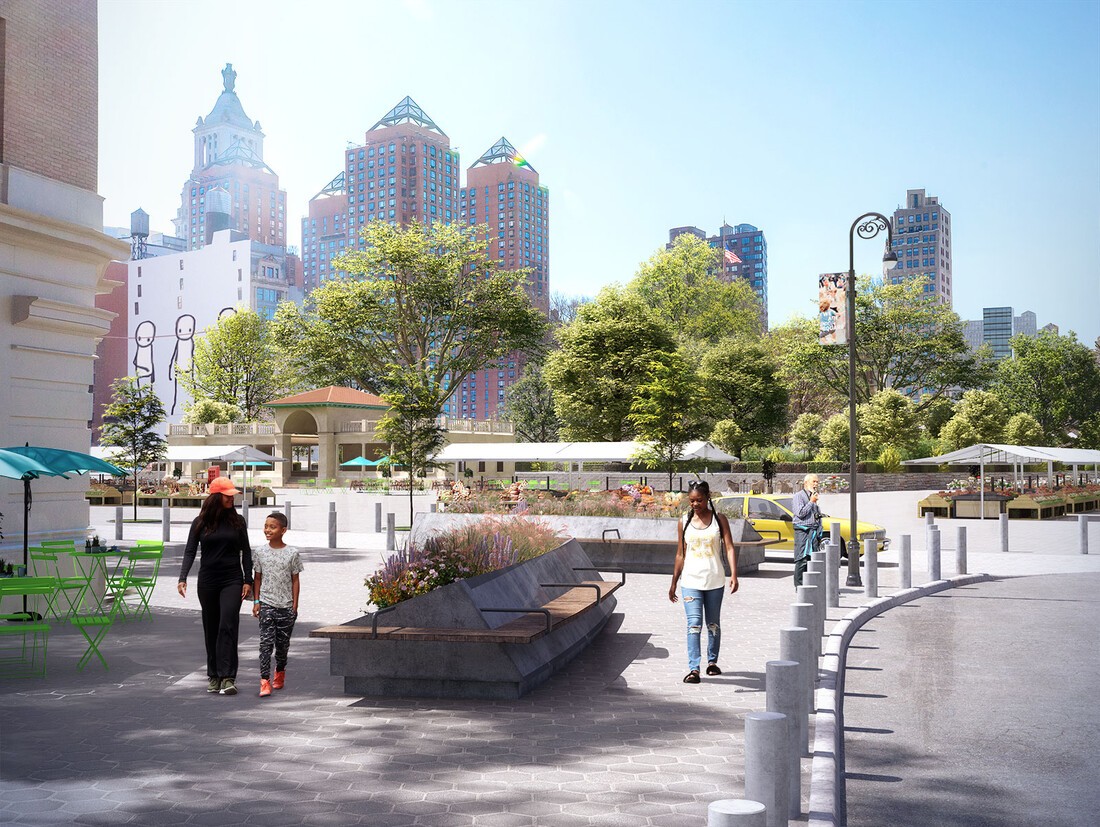 The Broadway Gateway Plaza
Union Square famously breaks the linear icon of Broadway at the Park which provides the opportunity for W 17th Street and Broadway to function as a gateway to and from the Park. Here the curb line is extended to allow for more generous seating and planting to further the robust planting of the Park and push its identity northward along Broadway.

Union Square Park Expansion
The guiding design principle for the future of Union Square is to safely expand the lively and culturally expressive public space of the Park as much as possible. By that measure, paving and surface treatments partner with roadbeds to create new synergies and an expansion of the public realm, both perceived and physical, that grow the accessible public domain beyond its current limits. 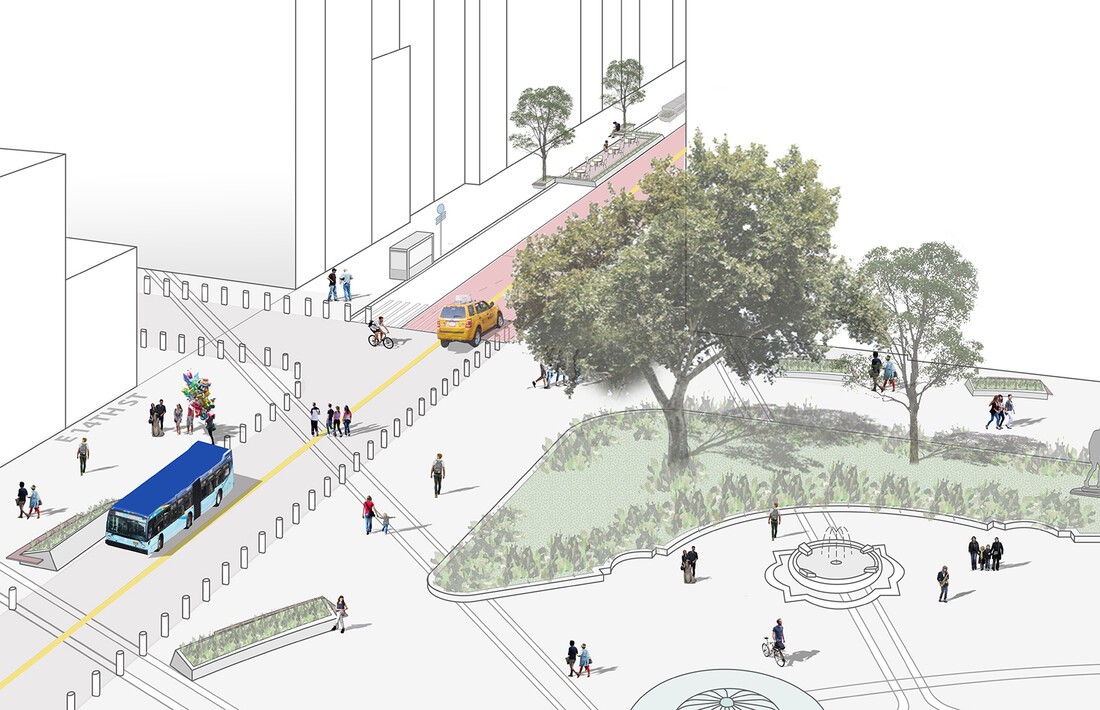 Union Square West Extension
A raised crosswalk that connects Union Square West southward towards University Place would create a more seamless N-S connection for pedestrians and cyclists to navigate the district. The storefront on Union Square West would enjoy a far greater exposure to foot traffic and outdoor cafe interaction while creating a critical link for a lively, world-class spur off of Broadway.

The Green Market activity expands through Union Square West
Union Square West can currently be characterized as a roadway barrier, where frequent use of green market vehicles or loading trucks for local stores idle and park along the eastern curb of this critical roadway, effectively cutting off the street from the Park. The Vision Plan provides additional public space to be utilized by the Green Market, pop-up vendors, and other seasonal and daily flexible programming. 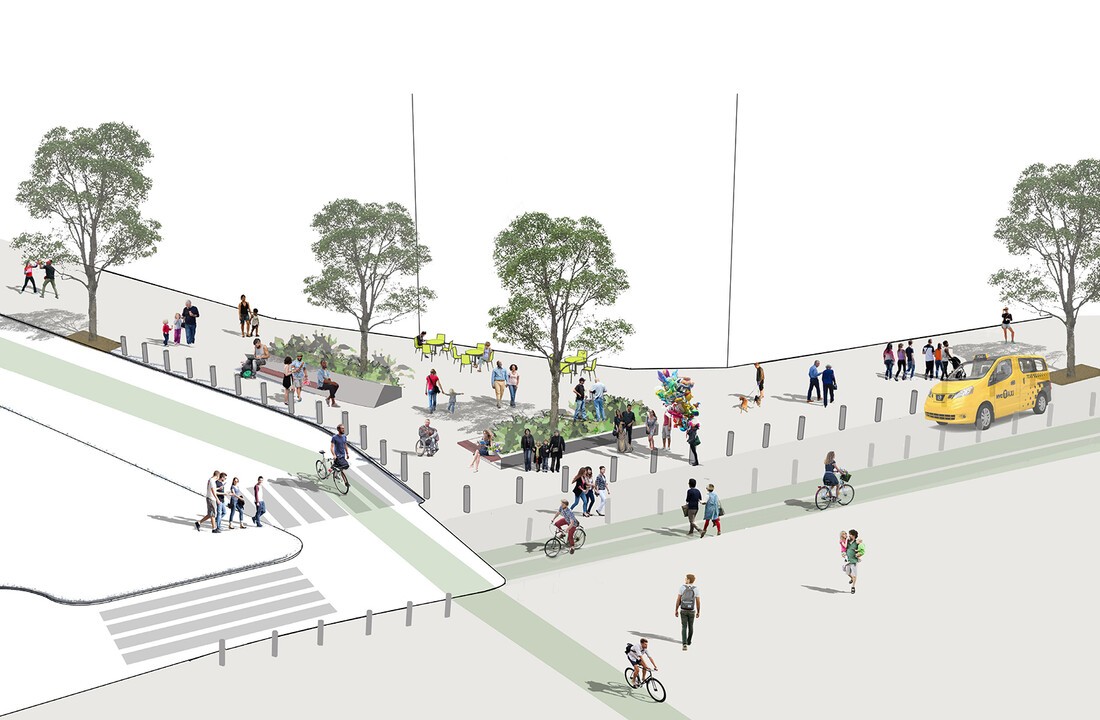 The Broadway Gateway Plaza Expansion
Broadway has been under a wholesale evolution for years and is slowly becoming more and more pedestrianized north of Union Square. As Broadway continues to be pedestrianized the northern threshold to Union Square Park becomes a space for a public realm expansion and a location for wayfinding, gathering, dispersion, and rotating art or a permanent landmark. 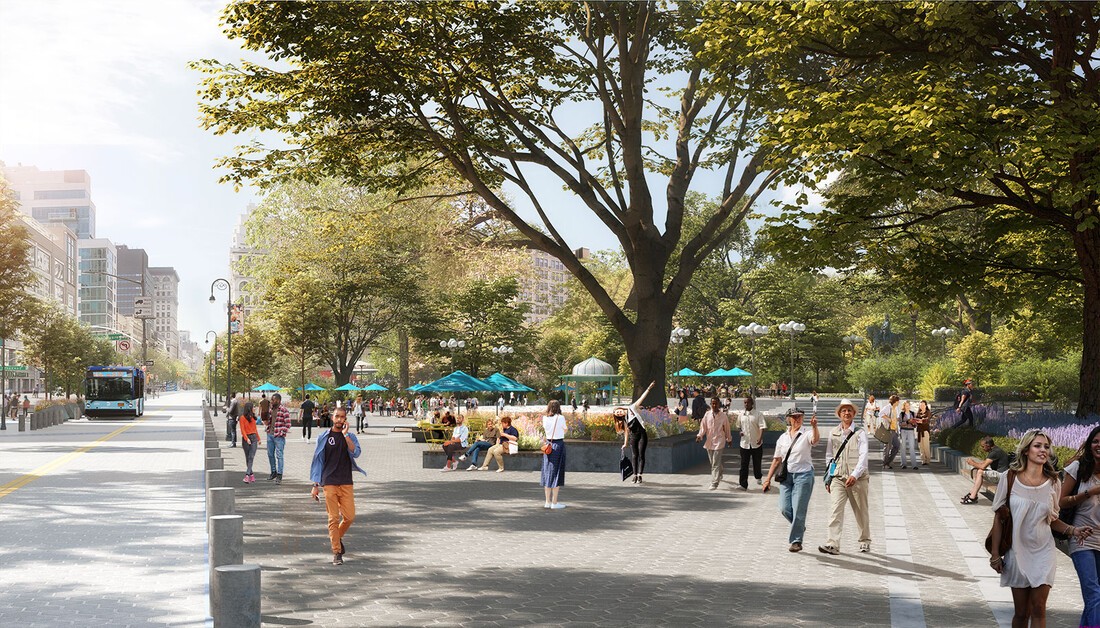 14th Street Pocket Parks
Street seats and materially contextual planters and benches can be deployed throughout the expansive Union Square Business Improvement District and 14th Street Corridor in order to create pockets of activity to balance the ample retail experience in this critical E-W Manhattan artery.

To connect Union Square to the surrounding building fabric the streetscape would be raised between 4th Avenue and University Place creating a shared street and flush curb condition to encourage a more coherent and unified public space experiences throughout the district.